You are here: Home / Digital Electronics / What is a Latch : Different Types and Their Applications

The digital circuits made of logic gates as the basic devices. This leads to the formation of combination circuits and sequential circuits.  The circuit design must have a memory element present in it. This element stores the data required for processing the code and the stored information is needed for the program during computing. The memories are treated as the key components in digital electronics. These storage devices are termed as a latch. Individual logic gates don’t have any capability of storage. But several gates connected make its storage capacity.  Each gate stores a single bit of binary information. These memory elements are classified into two types. They are Flip Flops and Latches. Both are formally known as Bistable Multivibrators. Because of two possible states in it either logic 0 or logic 1. The basic difference between these sequential circuits is the clock signal implied. The unclocked flip-flops are referred to as latches.

The Latch is a term used for the flip-flops without any clock signal applied for operation. The reason behind this is that the latches are capable of changing its states from 1 to 0 or 0 to 1 based on the input signal received that is either Set or Reset.

This type of sequential circuit can respond to any type of input signal applied. It keeps a check on the signals applied and responds to it immediately. The functionality of the latch is dependent on the enable signal and independent of the clock signal. The change in the states is sensitive to the level of the pulse applied rather than edges.

The latches are classified based on the input signals applied.

Further, the latches are classified based on the ability to change in output to the applied input.

An asynchronous latch that works based on applied set and reset signals without relying on control signals is referred to as S-R Latch.  It produces two outputs that are labeled as Q and Complement of Q. These gates are constructed by using the universal gates NAND or NOR.

The gate constructed by using cross-coupled NAND gates is of active Low type S-R gate. The active-low can be converted to high by including the inverters at the inputs.  By using two cross-coupled NOR gates one can produce an active high S-R gate.

The operation of the S-R latch based on the inputs applied is as follows:

The above truth table information is for S-R Latch constructed using NAND gates. Similarly, the truth table of this latch using NOR gates is

The word reset also stands for clearing because if the output state is 1 it will be reset or cleared to 0. This type of resetting is not possible in gated S-R latch. Because in such gates the output states have relied upon the application of the external pulse.

Generally, an S-R latch designed its behavior is sensitive to the inputs. To make it more flexible an S-R Latch circuit is made synchronous by adding the property of enable signal.  If the Enable signal is HIGH then the operation is performed based on the inputs applied and the change in the output is detected. 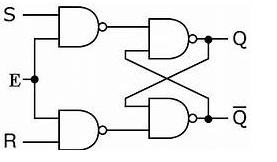 If the applied Enable signal is LOW. Then the inputs are ineffective and no change in the output states is detected. The enable signal used may also be a clock signal.

Usually, the NAND implementation of S-R is in the active low type.

The problematic condition of the S-R latch is the de-assertion of S and R inputs at a similar timing. Such a condition of the indeterminant state is removed in D-latch. These circuits are constructed by using universal gates.

The implementation of this latch using NAND gates is

This type of latches doesn’t require any separate S or R inputs. This can be constructed by using single input ‘S’ and the other input R is obtained by connecting the inverter at the input.  This single input can be referred to as D. The extension of the S-R latch is known as D-latch.

As the purpose of the S-R latch is to set or reset but the D-latches are capable of storing a single bit of information.

The D-latch in which the output states conditions rely on the Enable signals is referred to as Gated D-Latch. The output generated is the reflection of the applied input. These latches are also known as ‘Transparent Latches’. 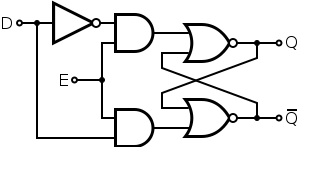 From the above circuit, the following points can be  concluded as

The Latches in which the output is fed back to the input is known as a J-K latch. The condition of the state under ambiguous has been eliminated in this circuit. When both the inputs J and K are HIGH the output states get toggled. It is similar to the basic S-R gate. The only difference is the feedback path application. 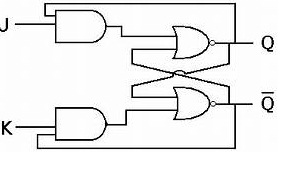 The short-circuiting of the inputs of J-K latches are resulting in the formation of T-Latches.  If the input applied is HIGH then the output states results inn Toggling. 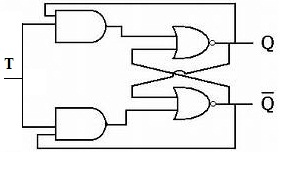 Advantages and Disadvantages of Latches

The advantages of the latches are

The applications of these basic digital elements are

1). What is the Difference Between Latches and Flip-Flops?

The basic difference between the latches and the flip-flops is that the latch is sensitive to the level of the signal applied whereas the flip-flop is Edge sensitive.

The feedback path is present in the latches which helps to retain the information stored in it. Even produce faster responses. Hence the latches are used.

3). Why Flip-Flop is called Latch?

The logic gates present in the latches are provided by the Enable signal to achieve the synchronous operation. This Enable signal can be a Clock. These gated latches sometimes referred to as Flip-Flops.

4). Why Latches are called Memory Devices?

The latches are known for their behavior of Bistable Multivibrator. It consists of two states 1 and 0. These bits are stored in the gates. hence these are known as memory devices.

5). Is Latch Better than Flip-Flop?

The application of additional control signals along with inputs so that the generation of the output is dependent o the applied control signals. Still, it is time-consuming. To obtain the quick realizations latches are better than flip-flops.