You are here: Home / Basics / Understanding About CMOS Fabrication Technology 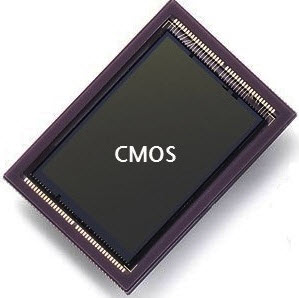 The complementary of the Commodore Semiconductor Group (CSG) or Metal Oxide Semiconductor (MOS) is called as CMOS technology. This technology is used in developing the microprocessors, microcontrollers, digital logic circuits and many other integrated circuits. It facilitates low- power dissipation and high-packing density with very less noise margin. It is mostly used to build digital circuitry.

The CMOS can be fabricated using different processes such as:

The fabrication of CMOS can be done by following the below shown twenty steps, by which CMOS can be obtained by integrating both the NMOS and PMOS transistors on the same chip substrate. For integrating these NMOS and PMOS devices on the same chip, special regions called as wells or tubs are required in which semiconductor type and substrate type are opposite to each other.

The fabrication process involves twenty steps, which are  as follows:

Primarily, start the process with a P-substrate.

The oxidation process is done by using high-purity oxygen and hydrogen, which are exposed in an oxidation furnace approximately at 1000 degree centigrade.

A light-sensitive polymer that softens whenever exposed to light is called as Photoresist layer. It is formed.

A part of the photoresist layer is removed by treating the wafer with the basic or acidic solution.

The SiO2 oxidation layer is removed through the open area made by  the removal of photoresist using hydrofluoric acid.

The entire photoresist layer is stripped off, as shown in the below figure.

Step8: Formation of the N-well

By using ion implantation or diffusion process N-well is formed.

Using the hydrofluoric acid, the remaining SiO2 is removed.

Step11: Removing  the  layer barring a small area for the Gates

Except the two small regions required for forming the Gates of NMOS and PMOS,  the remaining layer is stripped off.

Next, an oxidation layer is formed on this layer with two small regions for the formation of the gate terminals of NMOS and PMOS.

By using the masking process small gaps are made for the purpose of N-diffusion.

The n-type (n+) dopants are diffused or ion implanted, and the three n+ are formed for the formation of the terminals of NMOS.

Similar to the above N-diffusion process, the P-diffusion regions are diffused to form the terminals of the PMOS.

A thick-field oxide is formed in all regions except the terminals of the PMOS and NMOS.

Aluminum is sputtered on the whole wafer.

The excess metal is removed from the wafer layer.

The terminals of the PMOS and NMOS are made from respective gaps.

Step20: Assigning the names of the terminals of the NMOS and PMOS 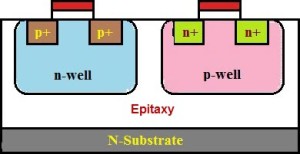 Different steps of the fabrication of the CMOS using the twintub process are as follows:

By using the above steps we can fabricate CMOS using twintub process method. 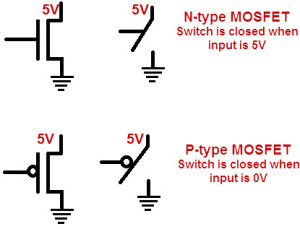 The below CMOS inverter circuit is the simplest CMOS logic gate which can be used as a light switch. If the input voltage is low (0V), then the transistor (P-type) T1 conducts (switch closed) while the transistor T2 doesn’t conduct (switch open). Hence, the output of the circuit will be equal to the supply voltage (5V). 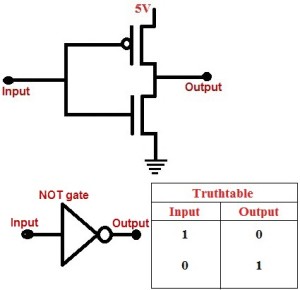 Similarly, if the input voltage is high (5V), then the transistor (N-type) T2 conducts (switch close) while the transistor T1 doesn’t conduct (switch open). Hence, the output of the circuit will be low (0V).

The above truth table shows the function of the CMOS inverter circuit and, from the table, we can observe that the output of the circuit is the inverse of the input.

Everytime whether the input is low or high, one of the two transistors conducts such that no current flows from the supply to ground.

Please refer to this link for CMOS MCQs.

Please refer to this link to know more about CMOS and NMOS Technology & Operation of IGBT Circuit.