You are here: Home / Digital Electronics / What is Quine-McCluskey Method : Minimization Technique & Examples

Quine McCluskey minimization method, is a technique for reducing for minimizing the expression in their SOP (sum of product) or POS (product of sum) form. Also called a tabular method, this method has advantages over the K Map method, in case the number of input variables is large.  For an input variable greater than six, the K Map method becomes more complex. For such problems, McCluskey or Tabular method has a simplified approach. Even it has a simplified approach as compared to other techniques such as the Boolean algebra method of minimization. The McCluskey method can be used to design complex circuits in digital systems.

What is Quine McCluskey Minimization Method?

Before going into the tabular column algorithm for reducing the binary expression, let’s briefly check the important terminology required during the minimization process. 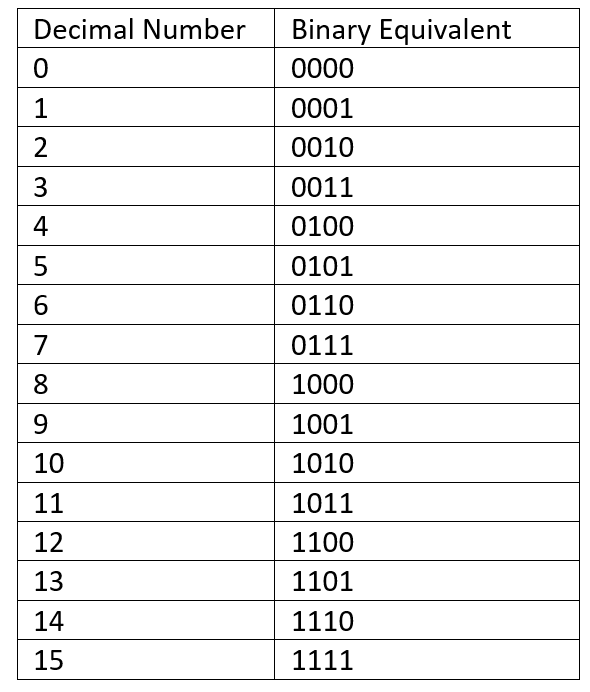 The decimal equivalent of the binary representation can be verified, by multiplying each with the weightage of the powers of two. The rightmost bit is called LSB(least significant bit) and the leftmost bit is called MSB(most significant bit). In order to obtain the decimal equivalent, the LSB is multiplied with two to the power zero, then to the power one, and so one. An example depicting the same has been shown below.

Now, lets see the Quine Tabular method, with an example.

In the above problem, we need to minimize the expression of (A, B, C, D) consisting of the given minterms. It can be seen that A is the MSB and D is the LSB term. We can see one more thing, the highest minterm is 15, which means that the number of variables is four. We can check the binary representation of the minterms from the table given before. Now we will check the step-wise solution of the above problem.

So they are qualified as matched pairs. Similarly, we need to check for all groups. The rule for selecting a group is n and n+1 group. This means that 0 groups are checked for matched pair for group 1, the group is to check with group 2, group 2 with group 3, and so on. Based on that, the following table is formulated. 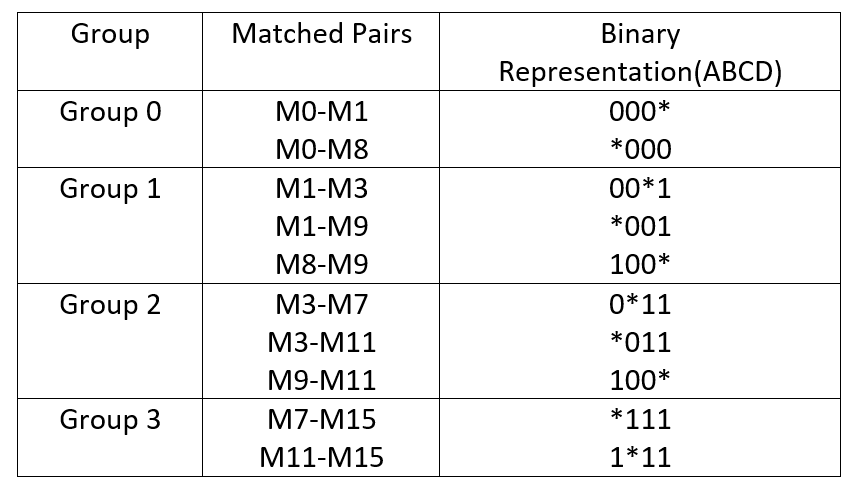 As we can in the first group, the matched pair is (M0-M1) and out of which the last digit is different. So it represented with a *. Similarly, while comparing group 0 and group 1, we can see that M0 and M8 also differ by the first digit, (0000-1000), so that is replaced by * in the binary representation. Next, we will compare, group 1 with group 2.

But if we compare the group (M0-M1) with (M8-M9), then we can see that representation is (000*) and (100*). So only the first bit is differing. The rest three bits are the same. So they are qualified as matched pairs. Similarly, we can complete the whole table as shown.

Step 4. Again the same step is repeated to find out the matched pair between group 0 and group 1 as obtained in step 3. But we can see that further, we can’t find any matched pairs between the groups 0,1, and 2. Therefore we can now write the minimized form

From group 0, we can see that the variables A and D are eliminated. Only B and C are left. If it is 0 we represent it with a compliment. If not, they are represented with a normal variable So the prime implicant is obtained in the last column.

So the minterm involved in the second row (1,3,9,11) are not essential prime implicants. Since each of them has already appeared in the first or third row. So finally the minimized expression can be given as

Hence we have seen, how to obtain the minimized expression by using the Quine McCluskey method. The same procedure can be checked for a problem involving 5 or 6 variables.

The best advantage of the Quine McCluskey method is, it can be used to minimize the expression of any inputs, which is not so easy using K-maps. For this reason, generally, it is used for variables involving 5 or above. But the disadvantage is complexity involving as we need to tabulate 4-5 tables in order to find the minimized expression. Which may cause, errors while calculating.

Please refer to this link to know more about De-Morgan Theorem MCQs.

We have seen Quine McClusky’s method of minimization, along with steps for the solution and solved examples. The same methodology can be adapted with a higher number of variables. Also termed as the tabular method, this method can be used for minimizing boolean expression with variables of more than 5. This method also checks out prime implicants and essential prime implicants for a given expression.