You are here: Home / Digital Electronics / What is the Karnaugh Map : Rules & Its Examples

The Boolean expressions with 2, 3, 4, and 5 variables can be minimized using the karnaugh map without using any Boolean algebra. It reduces the components or logic gates and inputs required for the given expression. Mostly simplification of logic function is done using karnaugh map only. This article will let you know how to simplify the Boolean expression using Karnaugh maps with some solved examples.

What is the Karnaugh Map?

The Karnaugh Map is defined as the graphical or pictorial representation of Boolean expressions with an array consists of 2^n cells arranged in a grid format. It is simply referred to as K-map or 2D truth table. It is used to reduce the complexity of solving 2, 3, 4, and 5 variable Boolean expressions of the digital circuits. There are two forms of K-maps such as SOP (sum of products) and POS (product of sum).

The karnaugh map rules are discussed below. 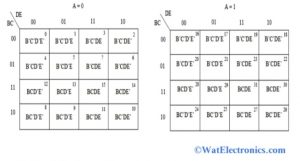 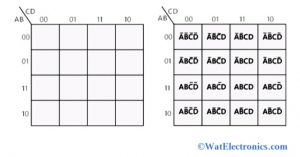 There are 16 possible minterms for the 4 variable k-maps, which are given in the below truth table.

How to use Karnaugh Map?

The components required for the logic can be eliminated and saves cost. That means, the simplified logic function contains the lowest number of logic gates with inputs per gate.

Most of the logic simplification is done by using karnaugh maps rather than using Boolean algebra.

The karnaugh maps are simply referred to as K-maps, which are the systematic way of computing Boolean expressions.

It helps to determine the Product Of Sum (POS) and Sum Of Products (SOP) expressions, which are called minimum expressions.

K-maps is similar to the truth table with all the possible inputs and their corresponding output variables. But the values of the K-maps are represented in the cells of an array, where each cell of an array contains the input variable.

The Karnaugh map is used for logic expressions that contain 2, 3, 4, and 5 variables. The number of cells of the K-map is equal to the total number of input variable combinations.

An array of K-map contains 2^n cells in the grid format, where ‘n’ represents the number of input variables in the given Boolean expression that is to be simplified. By taking the truth table method as a reference, each cell in the K-map is represented as a single row of the truth table and the cell is shown as a square.

The karnaugh map method is very fast and more efficient to convert the truth table of Boolean expression into simplified SOP and POS form.

The given Boolean expression can be converted into K-map by using two forms. They are,

Now, let’s have a look at 2 variable karnaugh maps in detail.

Example 1: Simplify the given 4 variable Boolean using the karnaugh map.

By using a 4- variable karnaugh map, the cells of the given function are represented with 1’s.

After representation, make the groupings to find the simplified equation. 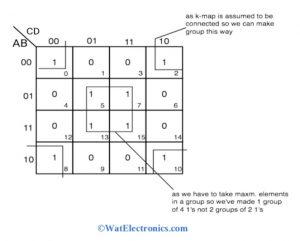 Example 2: Find the simplified Boolean equation for the given 3 variable function

For the given function, 3 variable k-map is used which contains 8 cells which are arranged in a rectangular array as shown below. 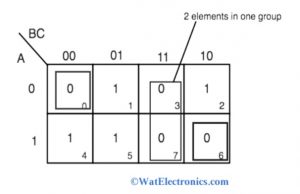 From the above-solved k-map, we found 3 groups. They are A’B’C’, BC, ABC’. These three product minterms are added to get the final expression in SOP form.

The output terms are represented with 1 in the corresponding cells because the given equation is in SOP form (minterms).

Draw the K-map as shown below. 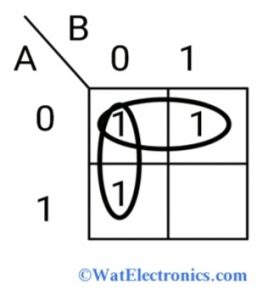 Now determine the minimized equation by reducing the grouping variables.

By taking the common terms from the two groups, the conjunction of the minimized equation will be

The same process is followed for 3, 4, and 5 variable karnaugh maps.

Thus, this is all about an overview of Karnaugh maps– definition, rules, use, 5 variable K-map, 4 variable or 4×4 K-map, and some solved examples. By using karnaugh maps, BCD (binary coded decimal) code can be converted into Gray code very easily and quickly. The truth table of the equation can be converted into K-map very easily and quickly. Here is a question for you, “What are the advantages of Karnaugh Maps? “