You are here: Home / Electronics / What is an Op Amp Integrator : Working & Its Applications

An operational amplifier is a voltage amplifier that has a differential input and a single-ended output. It is used with various external feedback components like capacitors and resistors. An operational amplifier is one such circuit that is capable of performing various calculus operations like integration and differentiation. It can be configured accordingly to perform such calculations. In the op amp integrator circuit, the output produced is nothing but the integration of the input voltage with respect to the total time.

A passive integrator is one such circuit that does not contain any active components like transistors and op-amp. On the other hand, an active integrator consists of active components which produce high output voltage and low resistance. We can use operational amplifiers as part of negative or positive feedback circuits. An integrating circuit is basically an inverting amplifier that consists of capacitors that are placed at appropriate locations.

What is an Op Amp Integrator Circuit? 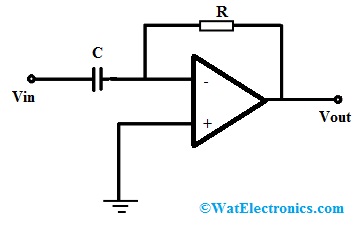 The output voltage ‘Vout’ generated by the op-amp for a particular input (Vin) can be given by the following op amp integrator equation.

‘Vout’ = output voltage of the integrator in volts

“Vin’ = input voltage of the integrator in volts

‘c’ = Integration constant. Here, it is the output starting voltage. 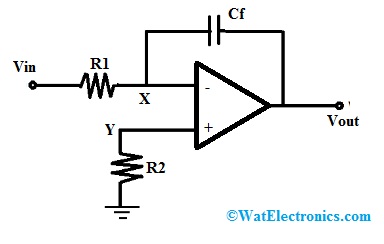 When we give a continuous-time square wave as input to the integrating amplifier instead of using step input, then we see a change in the input signal amplitude. This change causes the feedback capacitor to charge and discharge continuously.

During the positive half-circle of the input, there will be a constant flow of current through R1. As there is no current flow in the op amp integrator circuit, the entire current will flow through ‘Cf’. This will ensure that the capacitor is charged. As the capacitor is connected to the ground, the output voltage is the same as the voltage across the capacitor.

During the negative half-circle, the direction of the flow of current is reversed. This will cause the capacitor to get linearly charged thereby producing a positive ramp output.

When the square wave input signal is changed to a sine wave having a varying frequency, then the OP-amp integrator will stop behaving like an integrator and will start to behave like a low pass filter. It will begin to pass the low-frequency signals and attenuate the higher frequencies.

When the frequency is zero, the behavior of the capacitor is similar to that of an open circuit. The output will give no feedback to the inverting input. The circuit will start showing the behavior of an inverting amplifier that has a very high gain. 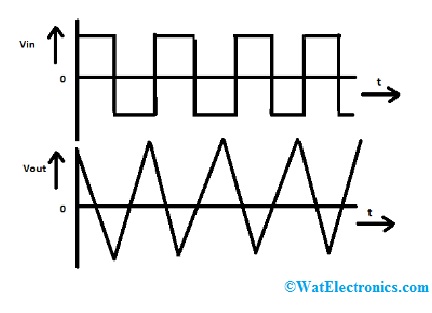 In an op-amp integrator with DC control, a resistor having a very high value of resistance is connected in parallel to Cf which is the feedback capacitor. The closed-loop gain of the op-amp will be similar to that of a normal inverting amplifier that is R2/R1. 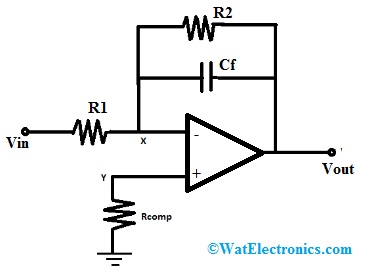 A gain of R2/R1 is attained. With the increase in input signal frequency, the feedback capacitor will start to get charged. It will start to behave like a short-circuit. As a result, the gain will start to decrease linearly.

The advantages of op amp integrator include the following.

The applications of op amp integrator include the following.

So, this is all about an overview of an op-amp integrator and its working. As we can see these are very useful circuits from the industrial point of view. They are used for numerous applications and the output voltage produced has a phase sight of 180 degrees with respect to the input voltage. Here is a question for you, what is an integrator?