You are here: Home / Electronics / What is LC Oscillator : Circuit & Its Working

In an AC circuit including an inductor & a capacitor, the current and the phase of the voltage are usually different. If you change the circuit components or the power frequency, then the whole circuit will appear simply resistive. Once the LC circuit reaches this condition, then it is known as resonance. In this condition, the circuit reaches the whole impedance or high value. The main essence of resonance is that the energy of the magnetic field within the inductance & the energy of the electric field within the capacitor can be changed into each other. The LC oscillator circuit is mainly used to produce signals with a specific frequency. It is applicable for tuners, oscillation circuits, mixers & filter circuits, etc. The LC oscillator circuit ignores the dissipation energy caused through resistance.

What is LC Oscillator?

LC oscillator definition is an oscillator that is used to generate high-frequency signals which are also known as RF oscillator. This circuit is also called an LC-tuned LC resonant or tank circuit. By using the practical values of capacitors and inductors, it is possible to generate high range frequencies like > 500 MHz. LC oscillators are used in heating with high-frequency, RF generators, radios, TV receivers, etc. These types of oscillators use tank circuits including the components like a capacitor (C) and an inductor (L).

These circuits are used for either producing signals at a fixed frequency otherwise selecting a signal at a fixed frequency using a more complex signal which is known as a bandpass filter. The main purpose of an LC circuit is to fluctuate with minimum damping so that the resistance can be made less.

The construction of an LC oscillator circuit can be done by connecting an inductor and a capacitor in parallel. This circuit generates the electrical oscillation for any preferred frequency. The components which are used in this circuit are capable of energy storage. Once the potential difference across a capacitor exists, then the energy can be stored in its electric field. 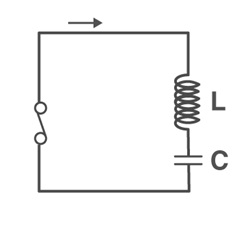 Likewise, once the current flow throughout an inductor, then energy can be stored in its magnetic field. The LC oscillator circuit is shown below where the capacitor & inductor are connected in parallel through a switch and a voltage source. At first, the switch ‘S’ is arranged in position 1, then the capacitor will gets charged toward the voltage source.

So, there is no more energy within the capacitor to maintain the flow of current in the coil, the field in the region of the coil will start to reduce & the flow of current throughout the coil will reduce. So, the conductor will generate back emf because of electromagnetic induction to resist the change within the current. So again this back emf will start charging the capacitor.

If an ideal capacitor & inductor are used, this oscillation will maintain until the end of time. However, in a practical case, the inductor will have some ohmic resistance and the capacitor will have some amount of leakage. These imperfections will waste some amount of energy among the cycles which result in the amplitude loss gradually and finally, the oscillations will disappear.

This slow decay within amplitude which tends to the loss of an oscillation is known as damping. The oscillations which are generated within a damped oscillator circuit will look like the following waveforms.

The types of LC oscillators are discussed below.

A Colpitts Oscillator is also one kind of LC oscillator. This oscillator is invented in the year 1918 by an American engineer namely Edwin H. Colpitts. Similar to the LC oscillator, this kind of oscillator uses a combination of a capacitor & an inductor to generate an oscillation at a fixed frequency. The main feature of this oscillator is that the feedback of the active device can be taken from a voltage divider that can be made with two capacitors that are connected in series across the inductor.

Difference between LC and RC Oscillator

The main difference between LC & RC oscillators includes the following.

‘L’ is the Inductance measured in Henries

‘C’ is the Capacitance, measured in Farads

‘ƒr’ is the Output Frequency, measured in Hertz

From the above frequency equation, we can conclude that if either capacitor or inductor is reduced, then the frequency will increase. This output frequency can be normally stated as ‘ƒr’ to identify it as the resonant frequency.

To maintain the oscillations in an LC circuit, we have to change all the energy which is lost in every oscillation at a stable level. So, the energy changed should be equivalent to the energy lost throughout every cycle. The simplest method to replace this lost energy is to get the output from the LC oscillator circuit, amplify it, and then feed it back again into the LC circuit.

This process can be achieved through a voltage amplifier with a FET, bipolar transistor, or operational amplifier like its active device. But, if the feedback amplifier’s loop gain is very small, then the preferred oscillation decomposes to zero. If the loop gain is large, then the waveform will be distorted.

The applications of the LC oscillator include the following.

Thus, this is all about an overview of LC oscillator circuits, types, working & their applications. Here is a question for you, what are the different types of oscillators?