You are here: Home / Electronics / What is Gate Turnoff Thyristor & Its Working

“Thyristor” is a semiconductor device that is popularly used as a switch in power circuits. With alternating layers of P-type and N-type materials, the thyristor is designed as a four-layered structure. It is available as both two-lead and three-lead designs. The three-lead design of the thyristor consists of an anode, a cathode, and a Gate lead. The thyristor usually starts conducting when the gate lead is triggered with the current and once turned ON, the thyristor conducts continuously until the device voltage is reversed or removed. For a long time, this was the only way to turn OFF a thyristor, which made it difficult to apply for direct current applications. Later a newer design was introduced which removed this drawback on the thyristor by implementing an easy way to turn ON and turn OFF the thyristor. This new design was named “Gate Turnoff Thyristor”.

What is Gate Turnoff Thyristor?

Gate Turnoff Thyristor is also popularly referred to as “GTO”. This is one of the three-lead designs of Thyristor. As the name suggests, GTO is an improved design of thyristor that can be both turned ON and Turned OFF with the application of current trigger to the gate circuit. This feature of Gate Turnoff Thyristor allows the application of devices where DC is used, which was not the case for earlier thyristors.

Listed below are some of the basics of Gate Turnoff Thyristor: 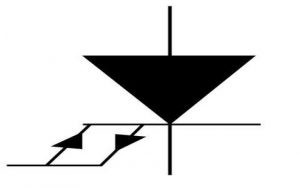 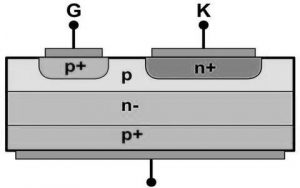 To understand the operation of the Gate Turnoff Thyristor, one has to look at both its turn ON and turn OFF mechanism.

Similar to SCR, a GTO can be turned ON by applying a positive pulse with respect to the cathode, to its gate terminal. But this Turn On process of GTO is not as reliable as that of SCR.

To turn OFF a Gate Turnoff Thyristor, a negative gate pulse with respect to the cathode is applied at the gate terminal. The application on negative pulse evacuates the charge carriers from anode and gate regions.

The VI characteristics of GTO include the following.

In the reverse bias condition, the cathode is positive with respect to the anode. At this point, the N+layer,  P-layer junction will be reverse biased as well as N- layer, P+ layer junction. Thus, these two reversed biased junctions will not allow the flow of current from cathode to anode. Consequently, a very minor current flows in the device when in a reverse-biased condition. When a breakdown occurs in this region, a larger current flow occurs.

In the forward bias condition, the anode is positive with respect to the cathode. Now, both N+, P junction, and N-,P+ junction both are in forward biased condition. Here, the central junction, P,-N gets reverse biased. Due to this only a minor amount of current flows before the breakdown of the junction. At this point, if a positive pulse is applied, a breakdown occurs and the device gets turned ON. After breakdown larger amount of current flows in the circuit.

For a GateTurnoff Thyristor with V-I ratings of 1600v, 350A turn ON voltage is 3.4 volts. The turn ON time of  GTO is 2 microseconds which is much faster than SCR which takes 8 microseconds to turn ON. GTO is ten times faster than SCR. The turn OFF time for GTO  is 15 microseconds. GTO can operate at frequencies as high as 1kHz. The Gate current to be applied to turn ON GTO is 2 amperes and for Turn OFF the gate voltage required is 200 Amperes, which is way too high. Due to this a complex circuit design is required at the gate terminal of GTO.  There are newer versions of GTO introduced in the market known as Integrated Gate Commutated Thyristors, IGCT, which had an in-built amplifier at the gate terminal, so the device can operate at a lower turn OFF current.

The applications of GTO include the following.