You are here: Home / Electronics / What is DMA Controller : Working & Its Applications

To execute any operation in a computer system, first, the microprocessor gets the instruction, decodes it, and further, executes. However, if the microprocessor is executing the entire task individually within the system, then it keeps the microprocessor busy continually. Therefore, to improve the processor’s performance, an external device like a DMA controller is utilized to control the operation of data transfer between memory & peripherals with the least utilization of CPU.

Basically, it is hardware-controlled data transfer; wherever both the address & control signals necessary for the data transfer are produced by the DMA controller. So this article discusses an overview of DMA controllers – working with applications.

What is DMA Controller?

How Does DMA Controller Work?

The direct memory access controller produces memory addresses and it covers numerous hardware registers that can be read & written through the CPU. These registers mainly include a byte count, memory address & minimum of one or above control registers. So based on the DMA controller features, these registers can select some combination of source, destination, transfer direction, the transfer unit size & the number of bytes to move within the single burst. 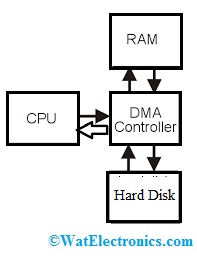 To execute different operations like input (i/p), output (o/p), otherwise memory-to-memory, the host processor initializes the controller by the number of words to transmit & the memory address to utilize, then the CPU orders the peripheral device to start data transfer.

The DMA controller provides addresses & reads or writes control lines toward the system memory. Every time, a data byte is arranged to be transmitted in between the memory & peripheral device, the controller increases its inside address register until a whole data block is transmitted.

The data transmission in the DMA controller can be done in three modes like burst mode, cycle stealing mode, and transparent mode.

In this mode, the transmission of a complete data block can be done in a continuous series. When the CPU permits the direct memory access controller to access the system bus, then this controller will transmit all data bytes within the data block before releasing the system control buses back to the CPU, although it will cause the CPU to be not active for a long time. So this mode is also known as Block Transfer Mode.

The cycle stealing mode is mainly used in a system wherever the CPU cannot be stopped for the time taken for the burst transfer mode. In this type of mode, the direct memory access controller gets the access to the system bus by using the Bus Grant & Bus Request signals. These signals are similar to the burst mode which mainly controls the interface between the DMA controller & the CPU. In this mode, the speed of data block transmission is not fast as compared in burst mode, however, the idle time of the CPU is not as long as within the burst mode.

This mode uses more time for transmitting data blocks; however, it is also the most significant type of mode in the overall performance of the system. In this mode, the DMA controller transmits data simply whenever the CPU executes operations that do not utilize the buses of the system.

The main benefit of this mode is that the CPU never ends performing its programs & DMA transmits are free in terms of time, whereas the drawback is that the hardware requires to decide once the CPU is not utilizing the buses of the system, which can be complex. So this is also known as hidden DMA data transfer mode.

There are three types of DMA controllers like third-party DMA, first-party DMA, and bus master DMA which are discussed below.

This type of DMA uses an engine of system DMA, which includes different DMA channels obtainable to utilize through I/O devices. The device mainly depends on the DMA engine of a system to achieve the transfer of data between the memory & I/O device. The driver utilizes the engine routines of DMA to initialize as well as program the engine of DMA. For data transfer of every DMA, the DMA engine can be programmed by the driver and after that gives the device a signal to start the transfer jointly with that engine.

If the device acts as a true bus master then the driver must program the DMA registers of the device directly. So the transfer address & count are attained from the cookie of direct memory access & set to the device.

The DMA controller block diagram has four channels that can be used over four input/output devices and each channel consists of a 16-bit address and 14-bit counters. Each channel in the DMA controller is programmed independently and they transfer the data up to 64kb. 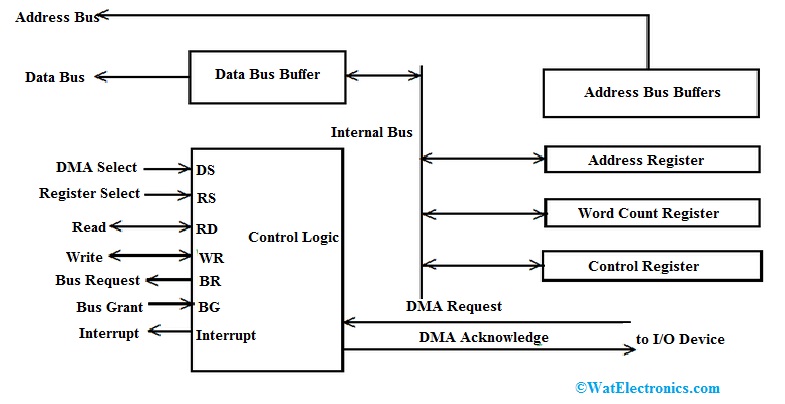 The lines that are provided between input/output devices and the control logic is DMA request and DMA acknowledges. Whenever the input-output device is ready to transfer, then the CPU will initiate the DMA, so in the initiation, process CPU will give an address from where the data has to be written or read.

The advantages of the DMA controller include the following,

The applications of DMA controller include the following,

Thus, this is all about an overview of a DMA controller – working with applications.  This is one type of hardware device used to allow I/O devices to access memory directly with low participation of the processor. This controller requires the similar old circuits of an interface to converse with the Input/Out. This controller includes three registers address, word, and control. Here is a question for you, what is a microprocessor?