You are here: Home / Digital Electronics / What is Preprocessor : Definition, Syntax & Its Commands

The preprocessor scans every code file and looks for preprocessor directives (directives) and they have their own syntaxes. These directives are the instructions that start with a preprocessor symbol # and ends with a newline. The directives allow the preprocessor to execute specific text manipulation operations. The output from this stage passes through many translation stages and then moves to the compilation phase.

The below picture shows the chain of tasks in a preprocessor. 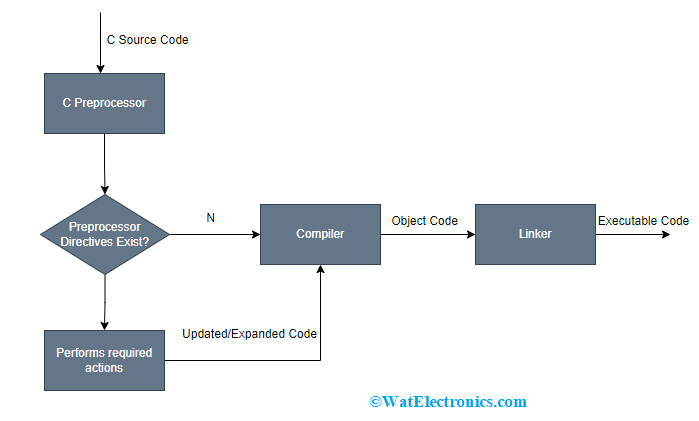 A few of the types in preprocessor directives are explained as follows:

Every macro is provided with some name and these macros are some portion of code in the program. At the time, when the compiler observes the macro name, it substitutes the name with actual code. #define is the preprocessor directive used in defining a macro.

The preprocessor syntax for define is

The file inclusion directive allows the compiler to include a source code file in the program and a person can include two kinds of files in the program which are:

Standard/Header files – The header files consist of pre-defined functions such as scanf(), print(), and others. In order to use the operations in those files, one must include the corresponding header files. There exist various types of header files for various operations where string file contains string operations and iostream contains input and output functions.

User-Defined files – When there is a lengthy program, the user can divide it into smaller files and include corresponding functions. The syntax for user defines files is #define “filename”.

These directives help in deciding whether some portion of the code can be compiled or not depending on a few rules/conditions. This decision can be done using two preprocessor directives which are endif and ifdef. The syntax is:

As per the above syntax, when the macro name is defined along with the macro, then the below statements are executed properly, if not defined with macro name then the statements between ifdef and endif are not executed.

Apart from the above directives, the other directives which are not generally used are:

#undef – This directive helps in undefining existing macros. The syntax is   #undef LIMIT

After undefining a macro in the code, the latter part of the code will not be evaluated.

#pragma – With this directive, few functions can be either turned ON or turned OFF and these vary for different compilers. This directive also provides added data to the compiler. The syntax is

#pragma startup & #pragma exit – These preprocessor directives are helpful in specifying the functions which are not required to run the program in before program startup and just before the program exits.

#pragma warn – At the time of compilation, when there are any warning messages, this directive helps in hiding those messages. The messages can be hidden as follows:

Difference between Preprocessor and Compiler

Q: What is a preprocessor?

A: The preprocessor is a program that processes your code before it is compiled. It is called a preprocessor because it happens before the compilation process.

Q: What does the preprocessor do?

A: The preprocessor will replace all macros with their definitions, and expand all #include directives by inserting the contents of the included files.

Q: How do I use the preprocessor?

A: You can use the preprocessor by placing directives at the top of code files (or in other places) that tell the preprocessor to do something. In most cases, you will be using #define to create macro definitions and #include to include other files into your code file.

On the whole, the preprocessor output appears the same as the input other than all the directives are substituted either with whitespaces or empty lines. Different kinds of formats and files possess various types of syntaxes claiming that starting a new file or returning of file has to be done before compilation.

This article has explained preprocessor syntax, definition, and directives with examples and advantages. Know how the program in C++ language can be written with preprocessor directives?