You are here: Home / Embedded Systems / What is a Microprocessor : Architecture, Types & Its Applications

A microprocessor is an integral part of various electronic devices. It forms the heart of a computer system and is responsible for performing multiple operations. Without a microprocessor, you will not be able to perform any operation on your computer. It is a major component of the electronic industry and is used for various purposes. It is used to perform computational and logical operations such as addition, subtraction, interprocess communication, input-output management. The classification of this can be done based on the number of instructions it can form in one second. Here we have given a detailed description of a microprocessor, its architecture, types, and applications.

What is a Microprocessor?

Definition: A microprocessor is nothing but the Central Processing Unit of a computer that has been constructed on a single chip. It is an integrated circuit and is able to implement all the important functions of the CPU. It is built on a silicon chip and is a clock-driven. The device is register-based. It accepts binary data and produces the necessary output after processing the data on the basis of the instructions which are stored in the memory. 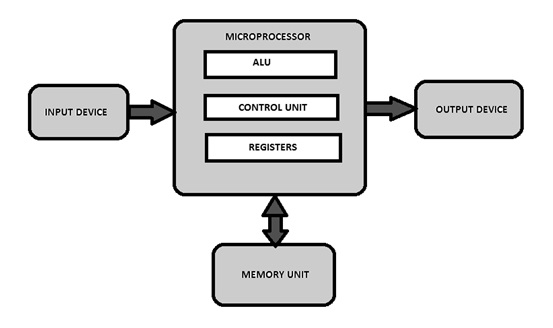 Here we are going to discuss the architecture of the 8085 microprocessor. 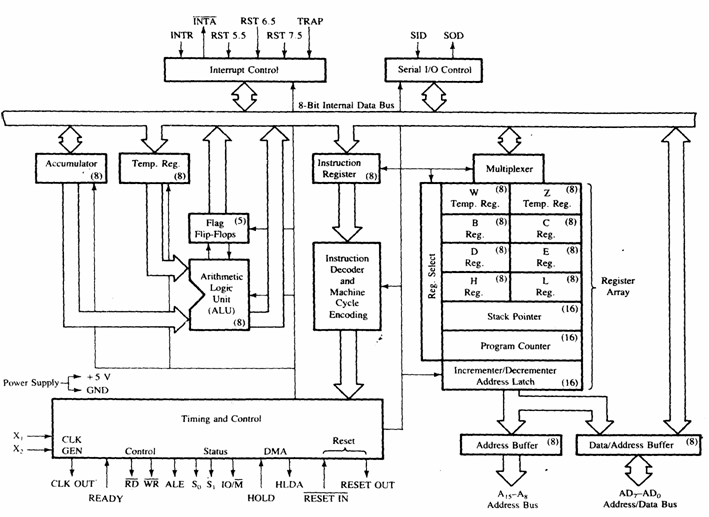 The device works at 3.2 MHz. The architecture mainly consists of the arithmetic and logic unit, timing and control unit, instruction register, decoder, interrupt control register and serial input-output control. The ALU performs the various arithmetic and logic operations while the timing and control unit brings about coordination between all the parts of the microprocessor. Given below is the architecture of an 8085

The bus is used for the transmission of data, address and control information. This transmission occurs in different elements of the microprocessor. The bus in this is basically of three types which are data bus, a control bus, and address bus.

IPC refers to the number of instructions that a CPU can execute in a single clock cycle.

Bandwidth is the number of bits that can be processed in a single instruction.

Clock speed refers to the number of operations performed by the microprocessor per second. The clock speed is mostly expressed in MHz.

Word length refers to the number of bits that can be processed by the microprocessor in a particular instance of time.

Data types refer to the types of data formats which the microprocessor can support. For example binary, ASCII signed number and unsigned number.

The different types are discussed below.

RISM or Reduced Instruction Set type can be used to work with fewer instruction cycles as compared to the CISM. It is made up of a set of simple instructions and it is also optimized for regular instruction pipeline flow. RISM is the most commonly used processor.

Superscalar Processor is capable of implementing instruction-level parallelism and that too within a single processor. It can execute more than one instruction per clock cycle. As a result, this kind of processor is extremely fast and gives more throughput as compared to primitive scalar processors.

This type of integrated circuit is used for specific purposes only. They can be used in a digital voice recorder or a bitcoin miner. The design is extremely modern and they may include the entire microprocessor in a single chip.

Apart from the above-listed, there are a number of special processors as well. Some of them are discussed below.

A coprocessor can be used to handle practical functions faster than the normal microprocessor. One such processor is the 8087 processor.

Input/Output type is mainly used to control IO devices. One such example is the DMA control. This type of processor has its own memory.

Digital Signal Processor requires a number of components like the term memory, input/output, and program memory. We can use this processor to process analog signals to digital signals.

The best examples are listed below.

8085 was designed by Intel in 1977. This type of microprocessor was developed using NMOS technology. It has an 8-bit data bus, 16-bit address bus, 16-bit program counter, and stack counter. It also has 6-bit registers which are arranged in pairs BC, DE and HL. It requires a 5-volt power supply.

8086 type was also designed by Intel. It is a 16-bit microprocessor that has 16 data lines and 20 address lines. The storage is 1 MB. It consists of instruction sets using which you will be able to perform complex operations easily. It operates in two modes which are maximum mode and minimum mode.

The advantages of a microprocessor include the following.

The disadvantages of a microprocessor include the following.

Applications of a Microprocessor

Please refer to this link to know more about Microprocessor MCQs

1). What is a microprocessor used for?

A computer uses a microprocessor chip to perform different operations. It can be programmed as per the requirement to give the desired output.

2). Is CPU a microprocessor?

3). What is the processor example?

There are different types of processors like Budget, Mainstream and Dual-Core Processor

4). Why is a processor important?

The processor provides the necessary instructions which are required by a computer or any other electronic device to perform its operations.

5). What is the unit of a microprocessor?

A microprocessor consists of the Arithmetic Logic Unit and Control Unit. It also has a number of registers.

Please refer to this link to know more about Stack and Stack Pointer.