You are here: Home / Basics / An Overview on the Concept of Frequency Modulation

Amplitude Modulation is not only the approach of modulating the signal, but there also exist many other kinds of modulation techniques. Frequency Modulation is one of the types of modulation. In the earlier days of communications, the necessary bandwidth for transmission of signals was not wide and even they do not hold the ability to reduce the interference signals. In such a scenario, frequency modulation was introduced but it was not much accurate compare with amplitude modulation. Then after, “Edwin Armstrong”, modified the intensity and bandwidth capacity of FM transmitters and this introduction enhanced its implementation to transmit a wide range of frequencies. So, let’s dive into the detailed concepts of frequency modulation, waveforms, and derivatives.

What is Frequency Modulation?

In general, Frequency Modulation is termed as modulating a continuous transmitting wave which has no intervals and holds the information. While as per the basic definition, it is defined as “A carrier signal which has no information varies its frequency in correspondence with the change in amplitude of the modulating signal”. The below pictures clearly depict the explanation of the above-stated definition. 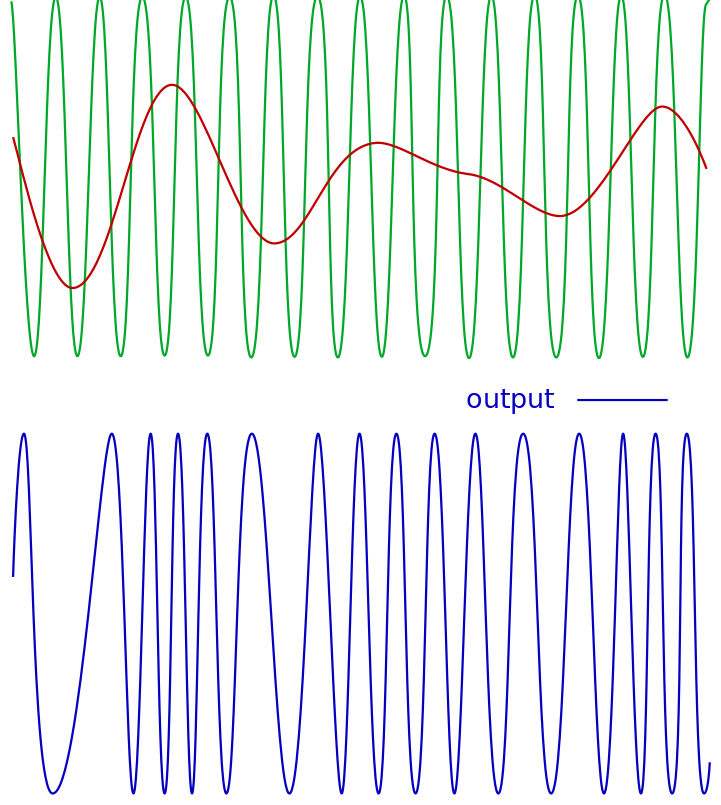 The initial one is the message signal which holds certain information, while the second signal has no information and is called the carrier signal. The modulation of these waves results in an FM modulated wave. The FM modulated wave is more crucial as the frequency of this moves up and down based on the amplitude of the message signal and this change in frequency is represented in the form of kilohertz. For example, when the frequency deviation is 3 kHz up and down, then it is represented as ±3 kHz.

The modulating signal (input signal) is represented as

The carrier signal is represented as

And in the expressions, Ac represents the amplitudes of the carrier signal while fi and fc are the frequencies of the two waves correspondingly.

Solving the two expressions, the modulated wave is represented as

And, β represents the modulation index of the frequency-modulated wave

And in the case of wideband frequency modulation, the bandwidth is stated as to when a corresponding number of sidebands are with substantial amplitudes. And it is

Frequency modulation is considered to be a constant bandwidth system because of below reasons:

To be clear, let’s go with the below examples

So, even when the frequency is increased from 20 to 20000, B.W lies only in the range of 150 to 190. Thus, because frequency modulation is stated to be a constant bandwidth system.

This produces the FM modulated wave with the frequency of

The above equation says that Fi moves up and down through a carrier frequency of fc over the specified range of ± kfAi. This is generally stated in correspondence with the modulated FM signal’s frequency variation and is

And indicated that it is the maximum deviation in the swing on both the negative and positive sides of fc. Nd it is based on the amplitude of the message signal and not on fi.

Based on the values of the modulation index, the FM spectrum expands and the distance between sidebands increases. So, the sidebands move apart from the carrier signal by the frequencies of fc±fi, fc±2fi, fc±3fi and so like that. So, the spectrums are as below: 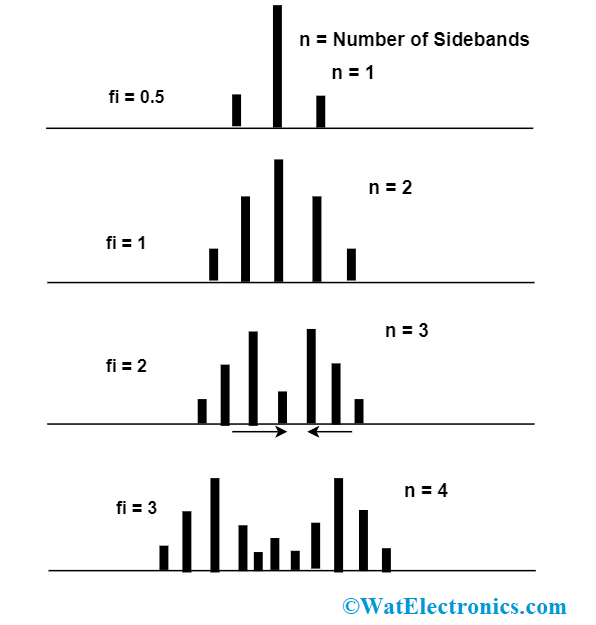 The initial bands will contain maximum power (nearly 80%) and so these are considered to be significant sidebands. As per the rule of Carson’s, approximately 98% of the modulated signal power exists where the bandwidth is equal to the frequency variation and twice the frequency of the message signal.

There are various approaches to generating FM signals. It means that frequency modulators are of many types and those generators are of:

Differences between AM and FM

At first, both amplitude and frequency modulations are used to transmit information through the technique of varying the carrier signal. Diagrammatically, the difference between these two are represented as:

Advantages and Disadvantages of Frequency Modulation

Few of the disadvantages that are in FM signals are

The applications of FM transmission include

Using the formula of 2(∆f + fi), the bandwidth is calculated

The formula of modulation index in FM is ∆f/fi

It is stated as the peak variation in between the minimum and maximum values of the instantaneous frequency.

The modulation rises and declines the voltage both above and below the certain value by a maximum quantity which is represented as Ea. The ratio of Ea/Ec is termed as the modulation coefficient (m).