You are here: Home / Electronics / What is Nanotechnology : Types and Its Applications

Nowadays life without the use of nanotechnology is difficult to assume. This technology deals with nanomaterials and these are already existing in various products and it has a huge demand in the industrial sector.  Nanotechnology is the term coined by a person named Norio Taniguchi in 1974. Usually, it is used for describing the processes in a semiconductor that is thin film deposition and to deal with the criterion on the scale of nanometers. The processes mainly included in nanotechnology are Separation, Consolidation, and Deformation and are performed on a single atom or a single molecule. In comparison to the materials of bulk size, the matter at the nanoscale has unusual properties and is highly reactive. This affects the electrical properties or strength of those materials.  The particles that are smaller than ‘100 nanometers’ can be stronger than the large materials.  This leads to the usage of nanotechnology in various applications in the field of engineering, sciences, and technology.

History: The concept and the ideas of such technology have been started by a physicist called ‘Richard Feynman’. He described the process through which the molecules and the atoms can be manipulated and controlled. After a decade of research on the exploration of ultraprecision machines professor, ‘Norio Taniguchi’ coined the word called Nano Technology. The developed tools called ‘Scanning Tunneling Microscope (STM)’ and the ‘Atomic Force Microscope (AFM)’ helps a lot in the analysis of the particles at the nanoscale. 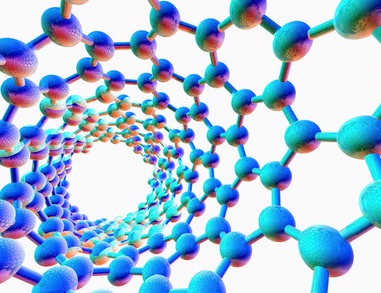 These nanomaterials possess high strength, lightweight, and great chemical reactivity in comparison to the bulk materials. Nano Technology and Nanoscience deal with monitoring the behavior and observe each of the individual molecules and atoms.

The branch which deals with the tolerances and the dimensions lesser than 100nm and can manipulate the structure of individual molecules or atoms such technology is defined as nano-technology. A nanometer is supposed to be one billionth of the meter and that is smaller than that of the light’s wavelength. The sole purpose of using this technology in various applications is to fabricate a new range of products, formulated with the new materials and chemicals and substitute the currently available pieces of equipment with improved levels of performance.

This technology has vast applications because of its change in material properties. For example, the substances that are unable to carry a charge or acting as insulators can behave like semiconductors at the nanoscale.  Even engineers make use of the wires made of nano-sizes so that smaller and the most powerful microprocessors can be designed. Likewise in many fields, this technology is imparted to make it much better and more effective.

Based on the applications the nanotechnology is classified. The technology dealing with the manipulation of the matter to increase the performance of the transistors and the microprocessors is known as Nanoengineering.

The technology used in the manufacturing of the products in the field of pharmaceuticals is known as nanomedicine. The fabrication of electronic devices is known as Nanoelectronics.

It follows two types of approaches one is bottom-up and the other is top-bottom. In the bottom-up approach, the components of small materials move towards the larger ones. whereas in top-down approach it is the opposite.

Please refer to this link to know more about Nanotechnology MCQs

The advantages and disadvantages of nanotechnology include the following.

The usage of this technology can cause issues related to health and safety. It can cause severe damage to human bodies.  The massive production can lead to the loss of employment in the sectors of farming and manufacturing. The accessing of atomic weapons becomes easier and at the same time can be destructive as well.

There are various areas where this nanotechnology is implemented. Some of the major areas of applications are listed as follows: 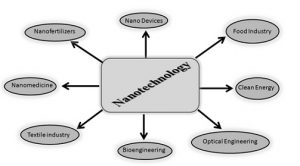 The usage of nanotechnology in the various applications of energy improves its efficiency and various techniques are used in the generation of energy effective in terms of cost.

Microelectronics has certain disadvantages in terms of an increase in physical size as well as an increase in the cost of production of IC’s. This can be overcome by using nanotechnology in electronics.

The term Nanobiotechnology indicates the intersection of biology with nanotechnology.

The involvement of nanotechnology in medicine can revolutionize the path of detecting and treating the damage that occurred in human bodies.  The most important applications are:

A branch that is a part of nanoscience that focuses on the design of molecular systems is referred to as warfare.

The development of the structures at the nanoscale is capable of revolutionizing the industries that include medicine, electronics, and consumer products. In the design of batteries, space, and sporting goods utilize nanotechnology.

The drug delivery process required in chemotherapy possesses this technology. fabrics, improvement in the air quality utilizes nanotechnology. By the chemical reaction performed using nanoparticles, the contaminated water can be made harmless.

Please refer to this link to know more about Touch Screen Technology MCQ’s.

Nanotechnology has an impactful and bright future in various fields of application regards to medicine, defense, biotechnology, and so on. The compactness of the size is considered to be the great advantage of using this technology.  In the future, the objects designed with this nanotechnology are capable of harvesting energy from their environment. Currently, many kinds of research are taken place in the field of nanotechnology so that the materials can be able to develop energy from light, movement, variation in temperature, etc…   There will be a predicted tremendous growth in the economy due to the involvement of nanotechnology. Can you explain in what way it is useful in medicine?