You are here: Home / Electronics / What is Megger : Construction, Working and Its Applications

Definition: A Megger is a device that is used to measure the resistance of insulators. It is an extremely important device from the industrial point of view because of its endless number of applications. It provides a very high DC voltage for the measurement of resistance. It is a portable device and is also referred to as a megohmmeter. It can be operated either by using a battery or by mechanical methods. The reading is directly given in ohms. The megger diagram is shown below. 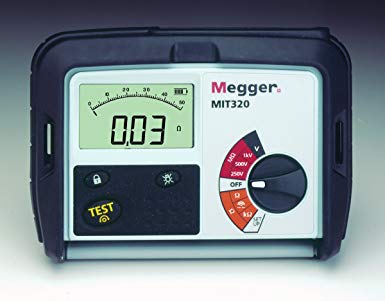 It uses three testing voltage like 500V, 1000V or 2500V. A hand-driven generator. It is used to generate the desired voltage. The generator supplies a constant voltage. The voltage can be used for the measurement of low resistance. It has a total of three coils. The pressure coil is used to rotate the moving coil in the anticlockwise direction while the current rotates the moving coil in the clockwise direction.

When we connect the unknown resistance in the circuit, the pointer of the coil will stabilize. The current coil and the pressure coil is used to balance the pointer and fix it in the middle of the scale. The deflection of the pointer is directly proportional to the applied voltage. When we apply the testing circuit across the megger, the deflection will move towards infinity. This shows extremely high insulation. For a device having a low resistance, the pointer will deflect towards zero.

The construction of the megger has been shown below.  It has two voltage coils and a current coil. V1 is placed over the magnet of the generator. A deflection of the pointer towards infinity indicates a weak magnetic field and therefore the torque experienced is extremely low. The torque will increase when the device is moved inside a strong magnetic field. The coil will experience maximum torque under the pole faces and the pointer will rest at the zero points of the resistor scale. In order to improve the torque, the voltage V2 is considered. 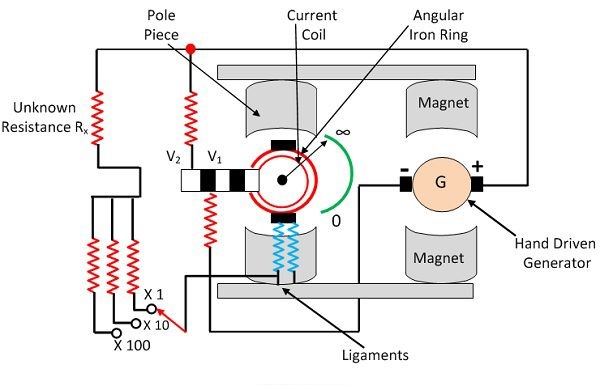 In our circuit, we use the action of both the coils V1 and V2. We will use a spring that has a variable stiffness. The coil is stiff near the zero ends and the stiffness becomes weak near the infinity end.  The spring opens the high resistance and compresses the low resistance which is a very important use of the megger. This is because the megger is used for measuring the insulation which is quite high.

The construction has a voltage selector that can be used to select the voltage range of the megger. We can control the voltage range by selecting the variable resistance which is connected in series across the current coil. The voltage in the circuit is generated by the hand-driven generator.

There are basically two main types like the following

The Electronic Type which is Battery Operated

The electronic type consists of various important parts like digital display, wire leads, selection switches, and indicator. The digital display is used to show the value of IR. The wires connect the megger with the external electric supply. The selection switches can be used to select the electrical parameter range and the indicator indicates the status of the parameters. The electric type is easy to operate and can work in congested places as well.

The hand-operated type is manually operated and has important parts like analog display, hand crank, and wire leads. The wire leads connect the megger to the circuit. The hand crank is used to achieve the required RPM and the analog display is used to show the IR value recording. One of the most important advantages of hand-operated type is that it does not require any external power source and it is also quite cheap.

The advantages of the megger include the following.

The disadvantages of the megger include the following.

The main use of the guard is to prevent surface leakage from the measuring circuit.

A Bridge Megger is a device that can be used to measure both conductor resistance as well as insulator resistance.

3). How many terminals are in Megger?

4). What is an electrical Megger test?

An electric megger test is basically used in the verification of electrical insulation in the circuit.

A megger uses a DC generator.

Thus, we can see that a megger is a quite useful device that has numerous applications. It can be used to measure the resistance of insulators and is also used for testing of devices. It has different variants as well each of which has a different use. If you can think of any other real-life applications of megger, then do let us know of it. Here is a question for you, what is the function of a megger?