You are here: Home / Digital Electronics / What is Half Subtractor : Working and Its Applications, K-MAP, Circuit using NAND Gate

To process the information like light or sound from one point to other we can use analog circuits by giving proper inputs in the form of analog signals. In this process, there are chances of noise being picked up by the input analog signals and this may lead to loss in the output signal, it means whatever the input we are processing at the input level is not equal to the output stage. To, overcome these digital circuits are implemented. Digital circuit can be designed with logic gates. Logic gates are an electronic circuit which performs logical operations based upon their inputs and gives the output only a single bit, either low (Logic 0=zero voltage) or high (Logic 1=high voltage). Combinational circuits can be designed with more than one logic gate. These circuits are fast and time-independent no feedback between input and output. Combinational circuits are useful for arithmetic and Boolean operations. The best examples of the combinational circuits include Half adder, full adder, half Subtractor, full subtractor, multiplexers, demultiplexers, encoder, and decoder.

What is Half Subtractor?

The Half Subtractor as said above is a combinational circuit and as it name goes it is used to subtract the two bits from the input. Here the output of the subtractor is purely dependent on present inputs and it’s doesn’t depend on previous stages. Half-subtractor outputs are difference and barrow.  It is similar to the arthimetic subtraction where in if the subtrahend is bigger than the minuend we would go for a borrow B =1  or else the borrow would remain zero B=0. To understand it better lets get into the truth table shown below.

From the above truth table, we can find the equation for the Difference (D) and Barrow (B).

Equations for Barrow-B: Barro is high only when input A is low and B is high. From this point, the equation for Barrow B will be, B= A’B

From the above difference and barrow equations, we can design the half-subtractor circuit diagram using the K -Map

K-Map for Difference (D) and Barrow (B) 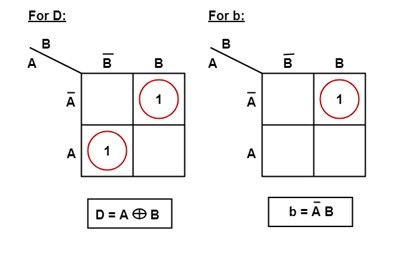 K-map for Difference (D) and Barrow (B) 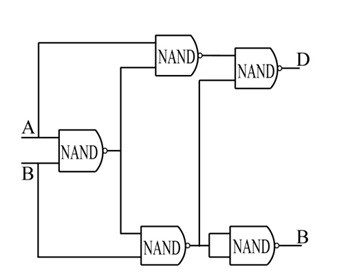 Applications of Half Subtractor

There are various applications of these subtractors. Practically they are simple to analyze. Some of them are listed as follows.

Thus, this is all about Half subtractor circuit. In real-time conditions subtracting multiple numbers of bits cannot be done by using half-subtractors. This drawback can be overcome by using full Subtractor.