You are here: Home / Electronics / What is an Inductive Reactance : Formula & Its Working

An inductor is normally a coil of wire. When current is passing through that coil, the electric field will be generated. So the field will get induced. The induced filed depends on the number of turns and this is inductance. An inductor due to its inductance resists the flow of alternating current. Basing on the Lenz’s law inductor will resist change in current. Reactance is defined as the resistance offered to the AC currents by capacitors and inductors only. Usually, reactance is denoted by X, the frequency with f, Inductance with L, and capacitance with C. The inductive reactance is dependent on frequency. The calculation of this can be done using simple formulas.

What is an Inductive Reactance?

Chokes and inductors are basically loops of wire or coils that are wound around some ferromagnetic material or around a hollow tube former for increasing their inductive value called inductance. When voltage is applied across terminals of an inductor, the Inductors store energy in the form of the magnetic field. For an inductor coil back emf voltage is proportional to the rate of change of current that is flowing through this. 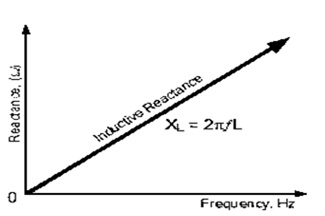 If we started examining or observing the self-inductance and the effects caused in the circuit then we can easily know the reason for this inductive reactance. To define this in a simple form it’s like opposition to the current flow.

When an inductor is applied with AC voltage, the flow of current will be different comparatively when it is applied with DC voltage. The phase difference between voltage and current waveforms will get produced by the sinusoidal supply. Both the frequency of the waveform and the inductance of the coil determine the opposition of current flow in the coil windings in the AC circuit.

AC resistance determines the opposition of current flow through coil in the AC circuit and it is commonly known as impedance (Z) of the circuit. For distinguishing DC resistance from AC resistance, the resistance always associates with DC circuits and the general term used for this is reactance. Reactance value is measured in ohms, just like resistance. To know the difference between the reactive value from resistive value, the reactance value is denoted by ‘X’.

The inductive reactance can be calculated by using the following formula. Inductive reactance is the product of 2 times pi and the inductance of the coil and the frequency of the AC current. So formula can be denoted as

Where ‘XL’ is inductive reactance that is measured in ohms

f is the ‘AC’ frequency of the electrical supply in hertz

‘L’ is the inductance value of the coil in henries.

Perfect inductor refers to that which has only inductance but no resistance and no capacitance. Although perfect inductors do not exist. To determine the formulas and calculations once we imagine the placement of a perfect inductor. If sine wave is applied to the perfect inductor, reactance impedes the flow of current and follow ohms law

‘XL’ is inductive reactance in ohms

‘I’ is current in amps

‘V’ is the voltage in volts

Integration on both sides

Mostly we consider purely inductive coil, but every time considering a pure inductive coil will not be possible but solenoids will have a certain resistance, it doesn’t matter how much small it was associated with the coils turns of wire that is being used. So that we can consider this simple coil as it is being resistance in series with inductance.

Here line OB is the horizontal current reference, OA is the voltage across the resistive component and it is in phase with current, OC represents inductive voltage that is 90 degrees in front of current, OD will give resulting supply voltage.

I = RMS value of the series current

VL = voltage drop across inductance which leads current by 90 degrees 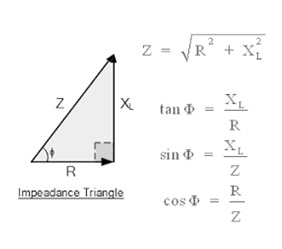 The difference between inductance and reactance includes

Please refer to this link to know more about Ohms law MCQs.

This is the complete description of inductive reactance, its formula, unit, and dimensions. Here is a question, what is the difference between reactance and capacitance.