You are here: Home / Articles / Know all about SCADA Systems Architecture and Types with Applications 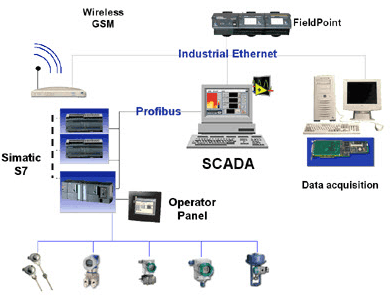 Advancements in Intelligent Instrumentation and Remote Terminal Units (RTUs) / Programmable Logic Controllers (PLCs) have made the process-control solutions in many of the industries to be easily managed and operated by utilizing the benefits of a SCADA system. SCADA is popular in several applications like process industries, oil and gas, electric power generation, distribution and utilities, water and waste control, agriculture/irrigation, manufacturing, transportation systems, and so on. Let us know about the SCADA system‘s working principle in brief from this article.

What is SCADA System?

SCADA stands for Supervisory Control and Data Acquisition; it is an industrial computer-based control system employed to gather and analyze the real-time data to keep track, monitor and control industrial equipments in different types of industries. Consider the application of SCADA in power systems for operation and control.

SCADA in power system can be defined as the power distribution application which is typically based on the software package. The electrical distribution system consists of several substations; these substations will have multiple numbers of controllers, sensors and operator-interface points. 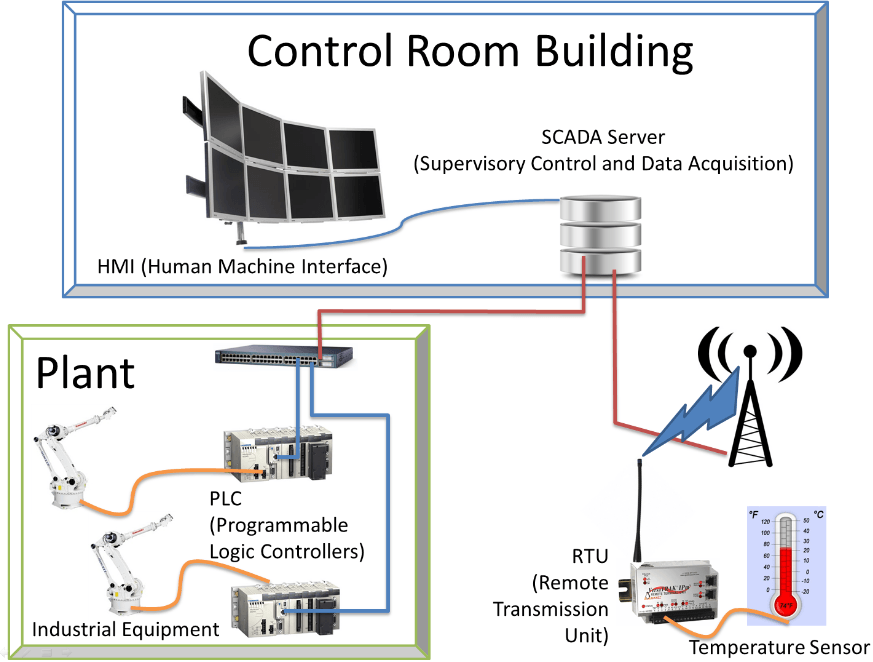 In general, for controlling and monitoring a substation in real time (PLCs) Programmable Logic Controllers, Circuit breakers and Power monitors are used. Data is transmitted from the PLCs and other devices to a computer-based-SCADA node located at each substation. One or more computers are located at different centralized control and monitoring points.

SCADA system usage have became popular from the 1960s with the increase in need of monitoring and controlling the equipment. Early systems built using mainframe computers were expensive as they were manually operated and monitored. But the recent advancements in technology have made-advanced, automated SCADA systems with maximum efficiency at reduced cost, according to the alarming requirements of the company.

Before discussing about the architecture of SCADA and different types of SCADA systems, primarily we must know a few SCADA basics. Consider the block diagram of SCADA system shown in the figure which consists of different blocks, namely Human-machine Interface (HMI), Supervisory system, Remote terminal units, PLCs, Communication infrastructure and SCADA Programming. 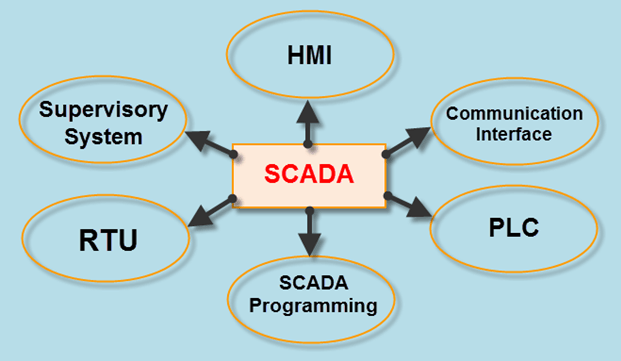 It is an input-output device that presents the process data to be controlled by a human operator. It is used by linking to the SCADA system’s  software programs and databases for providing the management information, including the scheduled maintenance procedures, detailed schematics, logistic information, trending and diagnostic data for a specific sensor or machine. HMI systems facilitate the operating personnel to see the information graphically. 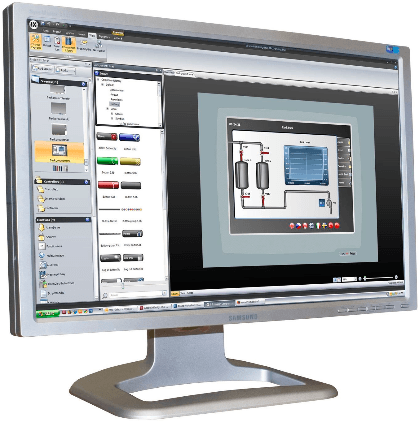 Supervisory system is used as server for communicating between the equipment of the SCADA system such as RTUs, PLCs and sensors, etc., and the HMI software used in the control room workstations. Master station or supervisory station comprises a single PC in smaller SCADA systems and, in case of larger SCADA systems, supervisory system comprises distributed software applications, disaster recovery sites and multiple servers. These multiple servers are configured in a hot-standby formation or dual-redundant, which continuously controls and monitors in case of a server failure for increasing the integrity of the system.

Physical objects in the SCADA systems are interfaced with the microprocessor controlled electronic devices called as Remote Terminal Units (RTUs). These units are used to transmit telemetry data to the supervisory system and receive the messages from the master system for controlling the connected objects. Hence, these are also called as Remote Telemetry Units.

In SCADA systems, PLCs are connected to the sensors for collecting the sensor output signals in order to convert the sensor signals into digital data. PLCs are used instead of RTUs because of the advantages of PLCs like flexibility, configuration, versatile and affordability compared to RTUs. 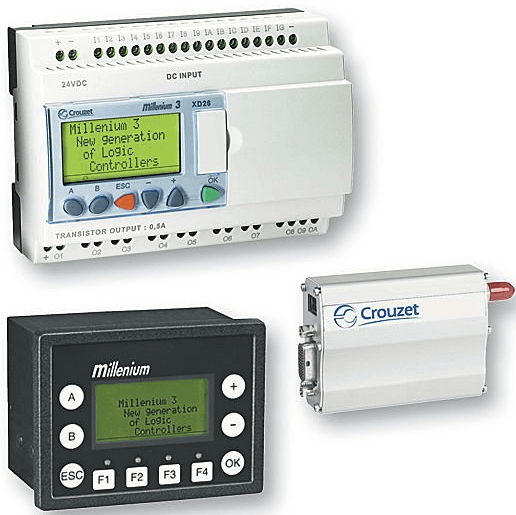 Generally the combination of radio and direct wired connections is used for SCADA systems, but in case of large systems like power stations and railways SONET/SDH are frequently used. Among the very compact SCADA protocols used in SCADA systems – a few communication protocols, which are standardized and recognized by SCADA vendors – send information only when the supervisory station polls the RTUs.

SCADA programming in a master or HMI is used for creating maps and diagrams which will give an important situational information in case of an event failure or process failure. Standard interfaces are used for programming most commercial SCADA systems. SCADA programming can be done using derived programming language or C language. 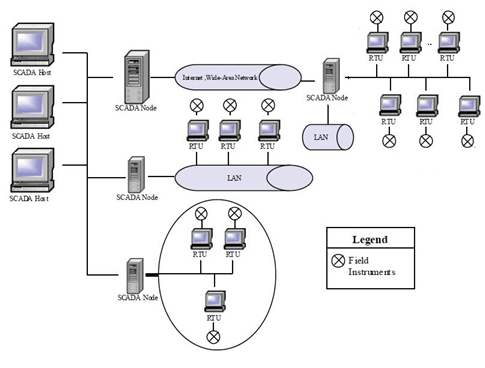 Above figure depicts an integrated SCADA architecture which supports TCP/IP, UDP and other IP based communication protocols as well as industrial protocols like Modbus TCP, Modbus over TCP or Modbus over UDP. These all work over cellular, private radio or satellite networks.

The choice of the existing communication depends on the characterization of a number of factors. The factors are remoteness, available communications at the remote sites, existing communications infrastructure, polling frequency and data rates. These factors impact the final decision for SCADA architecture. Therefore, a review of SCADA systems evolution allows us to better understand many security concerns.

There are different types of SCADA systems that can be considered as SCADA architectures of four different generations:

Minicomputers are used earlier for computing the SCADA systems. In earlier times, during the time of first generation, monolithic SCADA systems were developed wherein the common network services were not available. Hence, these are independent systems without having any connectivity to other systems. 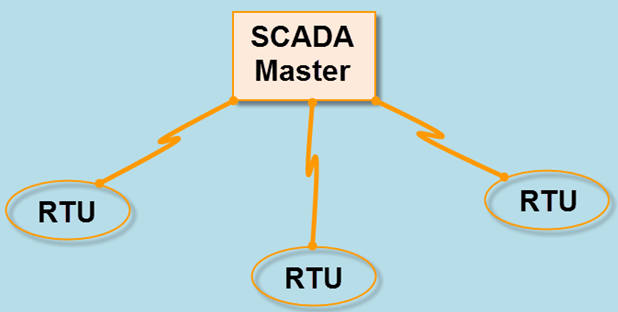 All the remote terminal unit sites would connect to a back-up mainframe system for achieving the first generation SCADA system redundancy, which was used in case of failure of the primary mainframe system. The functions of the monolithic SCADA systems in the early first generation were limited to monitoring sensors in the system and flagging any operations in case of surpassing programmed alarm levels.

In the second generation, the sharing of control functions is distributed across the multiple systems connected to each other using Local Area Network (LAN). Hence, these were termed as distributed SCADA systems. These individual stations were used to share real-time information and command processing for performing control tasks to trip the alarm levels of possible problems.

The cost and size of the station were reduced compared to the first generation system, as each system of the second generation was responsible for performing a particular task with reduced size and cost. But even in the second generation systems also the network protocols were not standardized. The security of the SCADA installation was determined by a very few people beyond the developers, as the protocols were proprietary. But generally the security of the SCADA installation was ignored.

The current SCADA systems are generally networked and communicate using Wide Area Network (WAN) Systems over data lines or phone. These systems use Ethernet or Fiber Optic Connections for transmitting data between the nodes frequently. These third generation SCADA systems use Programmable Logic Controllers (PLC) for monitoring and adjusting the routine flagging operators only in case of major decisions requirement. 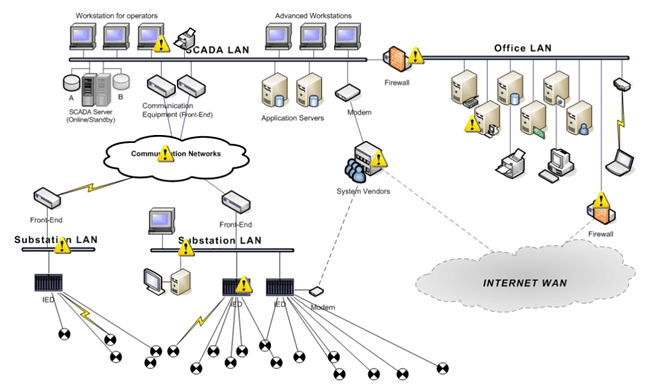 These SCADA systems are able to report state in real time by using the horizontal scale from the cloud computing facility; thus, more complex control algorithms can be implemented which are practically sufficient to implement on traditional PLCs.

The security risks in case of decentralized SCADA implementations such as a heterogonous mix of proprietary network protocols can be surpassed using the open network protocols such as TLS inherent in the internet of things which will provide comprehendible and manageable security boundary.

SCADA systems are used for monitoring a variety of data like flows, currents, voltages, pressures, temperatures, water levels, and etc., in various industries. If the system detects any abnormal conditions from any monitoring data, then the alarms at the central or remote sites will be triggered for alerting the operators through HMI.

In manufacturing industries the regular processes like running the production systems to meet the productivity targets, checking the number of units produced and counting the completed stages of operations along with temperatures at various stages of the manufacturing process, and so on, are taken care by using the SCADA application.

In distribution plants the water tank levels, pressure of system, temperature of plant, sedimentation, filtration, chemical treatment and other parameters or processes are controlled using the SCADA applications such as PLCs, PC based workstations which are connected each other using Local Area Network (LAN) such as Ethernet.

Power system can be defined as constituent of power generation, transmission and distribution. All these sectors are needed to be monitored regularly for improving the system efficiency. Thus, the application of SCADA in power system improves the overall efficiency of the system by providing the supervision and control over the generation, transmission and distribution systems. SCADA in the power system network increases the system’s reliability and stability for integrated grid operation. 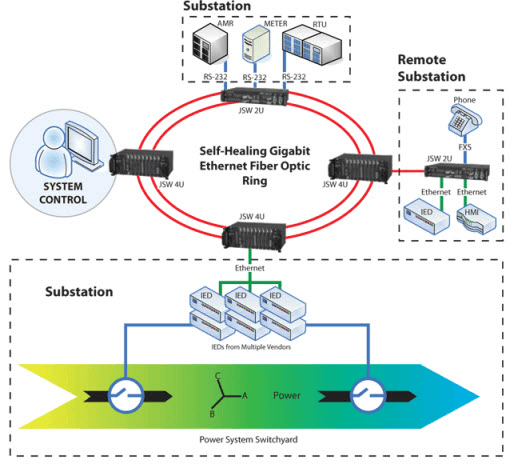 In large scale industries like power plants, steel plants and so on, many processes and operations such as movement of conveyer belts for coal or product transport, boiler heat temperature, etc. are to be monitored continuously and there is need to control the factors affecting these parameters. So, application of wireless SCADA will provide better control over the required control systems and operations. 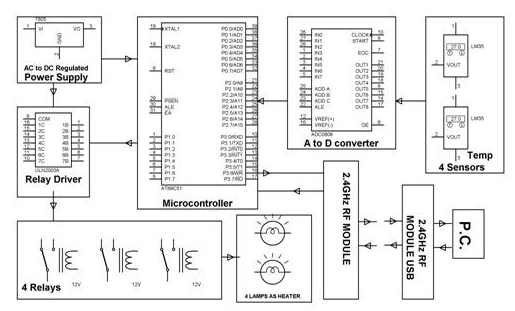 In this project 2.4 GHz wireless transmitter and USB receiver are used for sending and receiving the data collected from the temperature sensors which interface with 8051 microcontroller.  If the temperature goes beyond the set limit whether the low limit or high limit, then the microcontroller sends commands to the relays to turn on or off based on the command signal.

Monitoring and controlling of multiple operations in maximum number of industries are being automatically controlled by most advanced SCADA technology implementations. Already we are observing that many industrial operations are automatically controlled using the application of SCADA system technology, but still many researchers are working to develop more efficient SCADA systems for adopting full automatic control of all types of industrial operations. Having any queries and ideas? Post your comments in the comment section below for any technical help for implementing your ideas to develop real time projects.