You are here: Home / Electronics / What is RL Circuit : Derivation & Its Phasor Diagram

In basic electronics, the circuits are divided into various categories based on the operation, structure, connection, etc. The electronics circuits are active, passive, analog, digital, and mixed-signal circuits. Consider a passive circuit with passive elements like resistor, capacitor, and inductor which are combined to form 4 types of circuits such as RL circuit, RC circuit, LC circuit, and RLC circuit. These passive elements in the passive circuit don’t generate power but store the energy. These passive circuits can able to act as passive filters. Usually, the absence of the resistor in the circuit doesn’t consume energy. But practically, even an LC circuit consumes energy due to the usage of non-zero resistance components and connecting wires. Depending on the connection of the reactive element capacitor or inductor in series or parallel with the load, the high pass filter or low pass filter is formed. Single-pole filters are formed by using these circuits. This article gives a brief description of the RL circuit in series and parallel.

An electrical circuit that consists of passive elements like a resistor (R) and an inductor (L) connected either in parallel or series with a driven current source or voltage source is known as an RL circuit. The presence of a resistor in the ideal form of this circuit will consume energy, and it is equal to the RC circuit and RLC circuit. It is also referred to as the first order RL filter or RL network.

A first-order RL circuit is the simple form of the circuit with a resistor and an inductor connected in series with a driven voltage source or current source. It is an analog electronic infinite impulse response circuit.

From the below figure, consider the switch is closed at time t=0 and it remains closed permanently and produces step response of the input voltage. The current ‘I’ flowing through the circuit don’t reach to maximum value Imax and it is determined by the ohms law (ratio of V/R).

The limiting factor is due to the magnetic flux and the self-induced emf of the inductor. After some time, the flow of current becomes constant, induced current and magnetic field reduces to zero and the effect of self-induced emf gets neutralized by the applied voltage source. The RL circuit equation derivation is explained below. 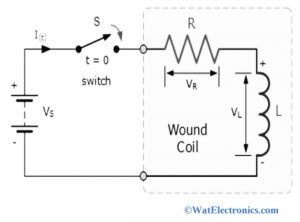 Consider a basic circuit as shown in the figure above. From the above circuit, we observe that the resistor and the inductor are connected in series with an applied voltage source in volts.

Let the current ‘I’ be flowing in the circuit in Amps

IR is the current flowing through the resistor

IL is the current flowing through the inductor.

Let the voltage drop across the inductor and the resistor be the VL and VR.

By applying KVL (Kirchhoff’s Voltage Law) to the circuit we get,

That means the sum of the voltage drop across the resistor and the inductor must be equal to the applied voltage source.

The voltage drop VR across the resistor is given as

The voltage drop VL across the inductor is calculated as

The sum of individual voltage drops across the resistor and the inductor gives the total voltage in the circuit
Therefore, the RL circuit formula is written as,

The formula of current I at any instant of time t for the RL series circuit is given as,

Where R = resistance in ohms

When the value of the current reaches the maximum steady-state at a time constant of 5τ, the inductance in the inductor reduced to zero and behaves like a short circuit. Then the coil can be removed from the circuit effectively. The current flowing through the inductor (coil) is limited due to the resistance in the windings of the coil. When the elapsed time reaches 5-time constants, the voltage and current values reach the final value.

The time constant of the RL circuit calculates the time required to reach 63 percent of its maximum steady-state current value flowing through the circuit.

To draw the Phasor diagram of the RL circuit, it is necessary to know the relationship between the current and voltage of the resistor and inductor.

The steps involved in drawing the Phasor diagram are given below. 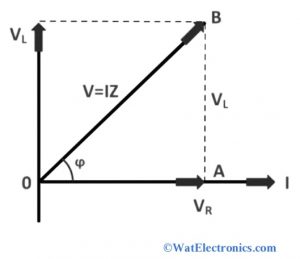 Step1: The current I is taken as a reference and represented on the horizontal axis as shown in the figure. Since the resistor and inductor are connected in series, the current flowing through the circuit and the passive elements are the same (IR=IL=I)

Step2: For the resistor, the voltage drop VR is represented in the same direction/axis with current I. Because the current and voltage are in the same phase (VR=IR)

Step3: The voltage drop VL across the inductor is represented perpendicular to the current I. since the voltage leads 90 degrees to current and they are out of phase.

Step4: finally draw the resultant voltage V, which is equal to the sum of VR and VL

Hence the phase angle difference between voltage and current for the series RL circuit is 0 to 90 degrees.

The opposition to the flow of an alternating current gives the impedance of the RL circuit. It is denoted by Z in ohms

Where R= resistance in ohms

The sudden application of current or voltage to the circuit containing a resistor, inductor, and switch leads to the response of a circuit, which is called the transient response of the RL circuit. It occurs only when the switch is turned off or on. Till the voltage and current values reach their maximum value, the switch will be closed.

The transient response of the RL circuit is represented graphically as shown below. 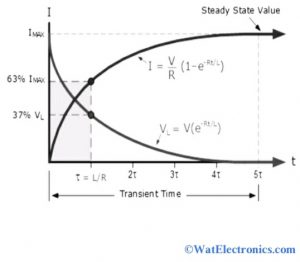 The impulse response of this circuit is represented in the decaying exponential function.

The step response of this can be determined by the charging behavior of the circuit. It shows how the signal in a digital circuit switches between low and high with time.

As we know, for resistor, VR=IXR, the current will have exponential growth.

When VL=V e(-Rt/L), the starting value of VL will be equal to the battery voltage at time t=0. When the switch is closed, then VL starts exponential decaying to zero as shown above.

The differential equation for growing current is given as,

The differential equation for exponential current decaying is given as

An electrical circuit that consists of a resistor (R) with a resistance (ohms) connected in series with an inductor with an inductance (Henry) and driven by a voltage source is called an RL series circuit. The current I flows through the circuit when an input AC voltage is applied. 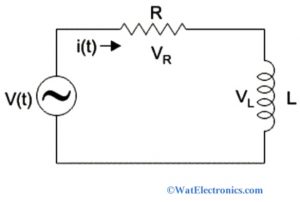 Consider an RL series circuit with a constant voltage source and a switch, as shown in the figure below. This shows that the resistor is connected in series with an inductor across the supply voltage V in volts. The RL series circuit diagram is shown below,

An electronic circuit that consists of an inductor and resistor connected in parallel with each other with an applied voltage source Vin is called an RL parallel circuit. The diagram of the RL parallel circuit is shown below. The output voltage Vout is taken across the inductor. Because of the parallel connection of a resistor and an inductor, the output voltage is equal to the input voltage. But the current flowing through the resistor and an inductor is different. It is not utilized as a filter and rarely used when compared to the series RL circuit. 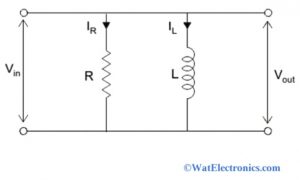 The RL circuit uses are listed below,

Thus, this is all about an overview of the RL circuit – definition, equation derivation, time constant, transient response, step response, differential equation, impulse response, first order, series and parallel, power factor, impedance factor, Phasor diagram, and its uses. When the RL circuit reaches its steady state, the inductive resistance of the inductor starts decreasing and the value of resistance becomes zero at some point. Here is a question for you, “What is the RC circuit?”