You are here: Home / Basics / What is Mesh Analysis : Methods & Its Uses

In network analysis, the basic and simple circuits can be analyzed by using basic techniques and laws like KVL, KCL, and ohm’s law. In the case of complex circuits, these laws are not applicable and unreliable as it consists of controlled sources. Hence to find the variables in complex circuits, mesh, and nodal analysis techniques are used. By the use of mesh/loop and nodal analysis, we can determine the variables like current and voltages of the circuit very easily. This nodal analysis is used to determine the amount of current flowing through the branch in a circuit. It is also known as the loop analysis method or mesh current method. This article is about an overview of mesh analysis and its examples.

What is Mesh Analysis?

The mesh current method explained by considering some of the mesh analysis problems and examples of an electrical circuit or network.

The below electrical circuit explains all the details about the problems & examples, mesh analysis solved problems, and mesh loop analysis examples.

Consider an electrical circuit with resistors and voltage sources as shown below. Now, using this analysis we have to obtain the voltage across the 30 ohms resistor. This example explained in finding the current in the circuit using the mesh current method.

Step I: From the given circuit, we observe two meshes with mesh currents I1 and I2 in the clockwise direction. The circuit with the mesh currents is shown below.

To write the mesh equation, consider the mesh current of one mesh is greater than all other mesh currents of the given circuit.

For the first mesh, the mesh equation is written as,

By dividing the above equation by 5 we get,

By multiplying the above equation with 2 we get,

For the second mesh, the mesh equation is written as

By dividing the above equation with 10 we get

By equation the above two equations we get

Hence by applying mesh loop analysis and mesh current method, the mesh currents I1 and I2 are determined.

Step V: By applying ohm’s law, the voltage across the resistor 30 ohms is determined

By placing the value of I2 and R we get

This analysis method is better as compared to mesh analysis of a complex electrical circuit with the current source as a common element for all the meshes in the given circuit.

We can define the required mesh equations using KVL and KCL to solve the mesh currents in the circuit.

To solve the super mesh analysis example, it is necessary to follow some of the steps as discussed below, 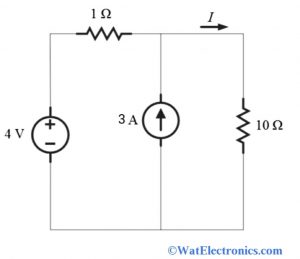 From the given circuit, we can observe that the current source of 3Amps is connected between the two meshes.

Step I: the no. of meshes formed in the given circuit is 2 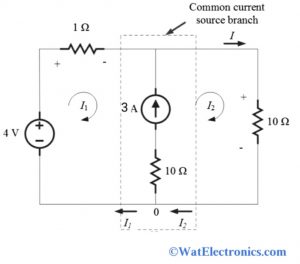 Meshes Formed in the Circuit

Step III: redraw the circuit as a super mesh by ignoring the current common current source

Step IV: determine the mesh equations for the above super mesh circuit by applying KVL

By applying KVL to the super mesh we get,

By applying KCL at node 0 we get,

Substitute eq2 in eq1 then,

Substitute the value of I1 in the above eq 1