You are here: Home / Articles / Liquid Level Sensor – Different Types of Level Sensors and their Workings 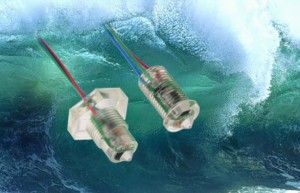 Liquid level sensors are termed as the sensors used for detecting liquid levels or interfaces between liquids such as water and oil or solids and liquids. These sensors can also be defined as transducers or as integrated systems with instrumentation and control capabilities. This type of liquid level sensor is one of the most important sensors and plays a vital role in variety of industrial and consumer applications.

The family of level Sensor measurement systems is classified into different categories such as:

Point level measurement sensors are used for the purpose of marking a single liquid height or for presetting a level condition. Usually, this sensor works as a high alarm that measures the overflow conditions in tanks through liquid level sensors, or works as a marker to note down the low alarm conditions. The different types of sensors are given below:

1. Level Detection and Measurement by Using a Float Sensor

Principle of Operation: A liquid level control system by using a float sensor works on the principle of buoyancy, which states, “A float immersed in a liquid is buoyed towards upward direction by an applied equal force to the weight of the displaced liquid”. As a result, the body drives partially and gets submerged upon the liquid surface and covers the same distance the liquid level moves.

Working: Level detection of liquids is often done with a ﬂoat-type liquid level switch. The ﬂoat transfers on a mechanical arm or sliding pole and activates a switch when the level moves towards upward direction. Sometimes the ﬂoat itself contains a small magnet that varies the state of a switch when the liquid level gets moving up and moves into the original position. This type of level sensor comes with many advantages like it is very simple, highly accurate, and best suitable for various products.

The Disadvantages of this sensor are that it requires various mechanical equipment, especially the pressure vessels.

Primary Areas of Float Sensor Application: In view of the requirements pertaining to the increase in usage of sealed tanks, the current industrial systems make use of this type of ﬂoat method for precise reading and accuracy, which is a good example of electronics and mechanical engineering, making it the most accurate level-measuring system for various applications in very large storage tanks. 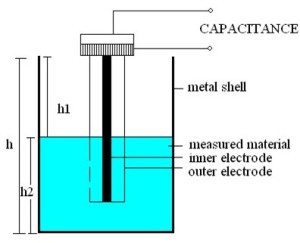 Capacitance level sensors are made available for wide range of solids, aqueous, organic liquids and slurries. This technique is frequently stated as the radio-frequency signals applied to a capacitance circuit. The capacitive sensors are designed to sense material with dielectric constants as low as 1.1 for coke and fly ash, and as high as 88 for water or other liquids.

Principle of operation: The principle of capacitive level measurement is based on the change of capacitance. There are two plates in capacitive sensor: one plate acts as an insulated electrode and the other plate acts as a tank wall. The capacitance depends on the liquid level. An empty tank has low capacitance while a filled tank has higher capacitance. A simple capacitor consists of two electrode plates separated by a small thickness of an insulator such as solid, fluid, gas, or vacuum.

The Value of C depends on dielectric constant used, area of the plate and also on the distance between the plates.

C=E(KA/d) Where: C = Capacitance in Pico farads (pF) E = a constant known as the absolute permittivity of free space K = Relative dielectric constant of the insulating material A = Effective area of the conductors d = Distance between the conductors

This change in capacitance can be measured by using an AC Bridge.

The measurement of liquid level is done by applying a Radio Frequency signal between the conductive probe and the vessel wall. The Radio Frequency signal results in a very-low current which flows through the dielectric process material in the tank from the probe to the vessel wall. If the liquid level in the tank drops, then the dielectric constant decreases, which leads to the drop in capacitance reading as well as minute drop in current flow.

This change can be detected by the liquid-level switch’s internal circuitry and translated into relay state changes of the level switch in case of a point level detection.

The disadvantages include sensitivity to changes in the measurable properties such as dielectric constant and conductivity which creates an issue; furthermore, it is an intrusive system.

Principle of operation: The principle used in this system states that “the presence of a product will make a change in the resistance between the two conductors.”

This system is applicable for level measurement in conductive liquids. The conductivity of the insulated material can be varied if the probe is covered or not covered within the conductive product. There are two electrodes: one is used as a metal wall of the tank, and the other electrode is inserted into the tank. This principle can be explained with a practical application.

A Conductive probe is used as a liquid level indicator for measuring the level of electrically conductive products in a metal water tank, or other container, which can be obtained by means of a probe isolated from the container and a conductivity ampliﬁer. When the product is not in connection with the probe, the electrical resistance is relatively high or infinite between the probe and the metal tank wall. If the level of the liquid rises completely between the probe and the tank wall, then the resistance gradually decreases.

This method is Advantageous as it is very simple, low cost and well suited for dual or multiple point control.

The method is disadvantageous as the probe must not get contaminated with grease or any other deposits and has limited suitability for products of varying conductivity.

As a practical example of this detection here we have shown figure of intelligent overhead tank water level indicator with block diagram which uses conducting probes for detecting the water in tank. This system is built by using priority encoder, BCD-seven segment decoder, seven segment display and other miscellaneous components. 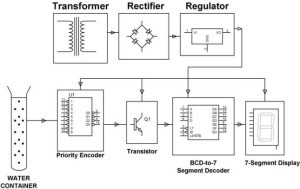 The probes are connected to +5V and the return or ground terminal is kept at the bottom of the tank. Nine active-low inputs of priority encoder are converted to active- low BCD output by internal circuitry and then the water level is indicated in seven segment display interms of percentage of water. As the water level is increases probes get shorted and correspondingly priority encoder gives BCD values and later the information is displayed on seven segment display through BCD to seven segment decoder IC.

A continuous level sensor is most sophisticated and also provides liquid level monitoring of an entire system. This liquid level sensor is used to measure the fluid level within a specified range, moderately than at a one point, which produces an analog output and directly correlates to the level in the vessel. To create a liquid level management system, the output signal is interconnected to process a control loop and linked as a visual liquid level indicator. This measurement system consists of variety of sensors such as 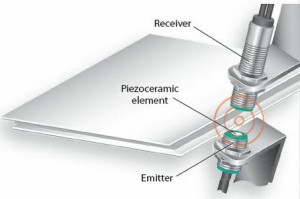 Ultrasonic level instruments works on the basic time-of-flight principle which states that sending a sound wave from a peizo electric transducer to the contents of the vessel, which may contain liquid, solid or slurries level.

This liquid level sensor comprises two elements such as an associated electronic transceiver and a transducer with relatively high efficiency. In case of a liquid level controller, the fluid level can be determined by measuring the trip time difference between a transmitted ultrasonic pulse and a reflected echo.

The ultrasonic sensors are advantageous as they are not in direct contact with the product, and the level measurement is done without involving any physical contact. They do not have any moving parts.

As a disadvantage, these types of sensors are not suitable for higher pressures in a vacuum and temperature limits of up to 170 degree centigrade. 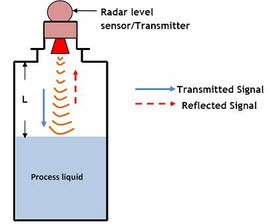 Radar level measurement system is based on the principle of measuring the time required for the microwave pulse and its reflected echo to make a complete return trip between the non-contacting transducer and the sensed liquid level. Then, the transceiver converts this electrical signal into distance/level and presents it as an analogue and/or digital signal. The transducer’s signal output can be selected by the user to be directly or inversely proportional to the span.

The working of a radar level sensor is explained here to measure the level of liquid or solid. The radar signals are transmitted from the antenna placed at the top of the water tank or vessel as shown in the above figure. The radar signal gets reflected by the liquid surface and echo is carried out by the antenna.

By varying the signal, the frequency gets varied during the time of echo and the time of the signal transmission comparison. The difference of frequency is proportional to the distance of the liquid, and this statement is used to determine the accurate level of the liquid.

The advantages of this radar level sensor include high accuracy and least specificity as it can measure liquid levels in plastic tanks without establishing any contact with the liquid.

The disadvantages of this type of sensor include the cost, which is very high and the price increases with the increase in accuracy. Moreover, these sensors are very sensitive to the buildup on the sensor surface.

Radar level sensors are widely used to measure the level of liquids as well as solids in storage tanks and tank terminals. These liquid level sensors operate at a wide range of temperature, pressure and various process conditions.

The optical sensor consists of an infrared LED and a light receiver. The light emitted from the LED is directed towards a prism which forms the tip of the level sensor. If there is no liquid present in the tank, then the light from the LED is reflected within the prism and the receiver.

When the liquid level raises and immerses the sensing prism, the light gets refracted out into the liquid, leaving little amount of light or no light to reach the receiver. Sensing this change, the receiver activates electronic switching within the level unit for operating external alarm or control circuit.

The advantages of this optical sensor are that they are not in contact with the process, and perform accurate measurements of small level movements.

The disadvantages of these sensors include limited applicability and sometimes a high-cost of installation.

This is about liquid level sensors and their types with advantages and disadvantages. For further information on this topic you may comment using the comments section below.