Film Capacitor is one of the most popular and widely used capacitors. These possess a difference in their properties of dielectric. In the modern type of film capacitor, there is the ‘direct electrical connection’ establishment with the electrodes that are present on both the winding’s. This keeps the path of the current to the electrode very short.  This capacitor has various benefits like it has very low ESR(ohmic resistance) and ESL(Parasitic Inductance). This can be preferred in various AC applications.

Even in the application where the high frequencies are used these capacitors are used. The construction of it consists of ‘Plastic Films’. These films are designed to be very thin. Once the ‘Film drawing process’ gets completed the designed film can be either coated with a metal or left based on the requirement.

There are various types of films. Some of them are metalized, polyester(PET), polypropylene, PEN and polystyrene films. Polypropylene based have a very low electrical losses and they have a very linear behaviour over a wide range of  frequencies.

What is Film Capacitor?

A capacitor whose dielectric is chosen is of the ‘Film’ type.  This type posses stable behavior, low manufacturing cost. These types of capacitors are defined as film capacitors.

The same principle of ‘General Purpose Capacitor’ is followed by these film Capacitors. The energy and the charge are stored on the respective electrodes present. As it is non-polarized it can be connected in any way in the circuit. When the supply is provided it gets charged.

If the supply is of AC type for the positive part of the cycle it gets charged. The remaining negative part of the load connected to it tends to discharge. So, the working principle is similar to other capacitors. The only difference is its dielectric chosen. The working diagram of this capacitor is the same as the general capacitors.

The symbol of this capacitor is the same as that of the general-purpose ones.

Based on construction these capacitors are classified into two basic types.

These are made by using two sheets of plastic followed by the sheets of Aluminum Foils. These sheets are then folded in the shape of a cylinder. The leads are then attached to the ‘Aluminum Sheets’. Hence the sheet of aluminum acts as ‘Electrodes’. The sheets of plastics are used as ‘Dielectric’. The various dielectrics can be chosen and followed the same procedure.

On the layer, the foil of aluminum is replaced by the Vacuum. The layer of metal preferred is either of aluminum type or zinc. Same as foil type the layers of aluminum acts as ‘Electrodes’. The layers of these capacitor’s plastic films act as ‘Dielectric’. One can change or manage the resistance of heat and the thickness of these types of capacitors.

Let us consider an example of the ‘Mylar Film Capacitor’. 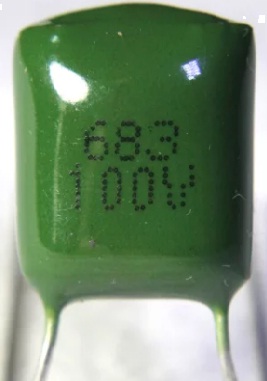 In this type of capacitor, there exists ‘Three Exceptions’ for the usage of ‘The last Digit’.

The above are the exceptions for it. Other than this the marking is done such that it indicates the value of ‘Breakdown Voltage’. For the above example considered ‘100 volts’ is the breakdown value. As noticed on the capacitor consists of ‘no indication’ represents that Film Capacitors are non-polarized.

There are various applications in which these capacitors are used.

In this way, these capacitors have many popular uses.

Film capacitors are very simple and easy to analyze and construct. These are known for their stability. It has a very low manufacturing cost. Even at the signals that possess high frequency by the usage of these capacitors, the losses get minimized. There are various applications of these capacitors. Can you give one name of this Film Capacitor which you have used recently?