You are here: Home / Electronics / What is Drift Velocity of an Electron & Its Derivation

The drift velocity concept can be understood by observing the random movement of electrons around the conductor. These electrons keep on traveling in the conductor in a random way through random velocities. Sometimes, a conductor may be subjected to an electric field & consequently some type of electrical energy is used on the randomly moving electrons except in the field direction.

What is Drift Velocity?

Drift velocity definition is, subatomic particles like electrons shift in random ways continually. Once electrons are subjected to an electric field then they shift randomly, however they drift slowly in one way within the direction of the applied electric field. The net velocity at which point electrons will drift is called also called drift velocity. To understand this concept first we have to know about drift. So, drift is the movement of an object slowly in the direction of something. The SI unit of drift velocity is m/s or m2/(V.s). 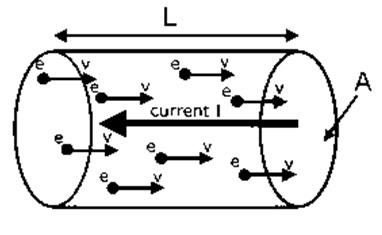 In a resistive material, this is directly proportional to the current as well as the magnitude of the exterior electric field. Based on ohms law, the drift velocity equation can be expressed as

From the above-mentioned equation,

‘u’ is the drift velocity

‘E’ is the electric field

Drift Velocity of an Electron

Once the average velocity is achieved by electrons particles in the electric field are called the drift velocity. We can imagine that the movement of particles will be through a plane & thus the motion can be expressed like the axial drift velocity.

This concept is understood through revising the electron’s random motion around the conductor. In a conductor, the movement of the electrons will be continuous within a random manner using random velocities. Once the conductor is in the electric field then some force is applied toward the moving electrons within the field’s direction.

In a conductor, whenever the charged particles move around by colliding with other particles. Thus, the particle’s average speed can be taken into observation within the conductor. Under the electric field impact, the average velocity can be obtained through the electrons because of the electron’s drift.

It can be calculated through current density, so the formula is given as

In the above-mentioned equation where,

‘V’ is the drift velocity of electrons

‘q’ is the electron charge, measured in Coulombs

‘n’ is the number of electrons

So, from the above drift velocity formula, we can conclude that, from the out of 4 quantities, any three are given then the remaining quantity can be found out simply. Thus, the electron’s velocity within a specific metal piece showing 0.1 Amps of current is approximately 1×10-5 m/s. Usually, the electrons shift at extremely high speeds like million m/s throughout a wire however, they move extremely slowly within the path of the current. So this is an example of drift current.

Electrons within the conductors move in random ways which cause a collision between them. The flow of current can be caused once all the electrons present in the conductor shift in a specific direction.
Now, there is no specific time once these collisions occur in a conductor, assume that the time among the clash of electrons is ‘T1’. Likewise, for the second time, ‘T2’ is the second pair of electrons & this will continue for all the electron pairs which are there in a conductor.

For instance, assume the whole number of pairs like ‘n’ thus we will analyze an average from T1 – Tn which is known as Relaxation time (乁). It can be defined as the time period between the collisions of two electrons.

From the above equation

‘ V’ is the final velocity

‘U’ is the initial velocity

If early velocity like U is 0 after that, V = at

This average velocity is because of the application of electric field (E) within a single direction.

In the above equation, ‘Vd’ mainly depends on the electric field & the Relaxation time ‘T ‘.

The current density can be defined as the whole current supplying throughout a cross-sectional conductor unit within a unit of time. We know the formula of drift velocity.

From the above equation, we can write is as

;J’ is the density of current measured within Amperes for each square meter

‘v’ is the electron’s drift velocity

Therefore, we can conclude that the electron’s velocity & its current density is equivalent to each other. In addition, once the intensity of the electric field enhances, then the velocity will be increased & the flow of current throughout the conductor also enhances.

The current ‘I’ for a conductor can be derived as

‘A’ is the cross-section area of the conductor

‘n’ is the number of charge carriers for each cubic meter

‘q’ is the charge on every charge carrier

For electron, I = nAve, where the electron charge is ‘e’

This equation may be deduced as follows, with reference to Figure a:

The volume of wire within the section will be

If the charge carriers are ‘n’ for each unit volume within the wire, then the number within volume ‘ΔV’ will be

On every charge carrier, if the charge is ‘q’ then the charge quantity in the section will be

Assume that every charge carrier takes a time ‘Δt’ to move the distance ‘Δx’.

If the above equation is Divided through Δt at both sides, then

So this is the relation between the current & the velocity.

So the above-mentioned equation is the main relation between an electron’s velocity & the electric field.

The main relation between drift velocity & relaxation time of electrons within a conductor is discussed below. A conductor with ‘L’ length is connected to a direct current and the emf source is ′E′. If the conductor’s length is increased through extended it, keeping emf source stable, then this velocity is affected.

The electrons drift velocity is vd = at/2

Electrostatic force can be given through ma=qE′

So, length is extended while maintaining potential disparity is stable.

So, drift velocity will turn into 1/3rd.

Please refer to this link to know more about Ohms law MCQs.