Ceramic Capacitors are non-polarized and fixed value capacitors. In circuits where a small size of capacitor is required Ceramic capacitors comes into picture. These where intially developed in German as replacement for mica. Before 1920’s due to insulating properties of mica it was used as a dielectric material in a capacitor. Later, as there was shortage for mica a paraelectric titanium oxide was used as a dielectric which formed the Ceramic Capacitor.

The first Ceramic Capacitor was disc shaped and now it is available in different shapes and sizes. When the ceramic capacitor are layered multiple times it becomes MLCC. Depending on the shapes and sizes they are used as feed-through capacitors, electro magnetic interference supressers and even as power capacitors in transmittors.

What is Ceramic Capacitor?

The capacitors in which the CERAMIC material such a paralectric titanium oxide or ferroelectic  is used as the Insulating Material or dielectric is known as the Ceramic Capacitors.

The most widely preferred types of this Ceramic Capacitors are 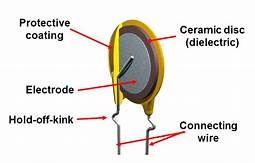 In this design “Multiple Layers of Ceramic Material” acts as Dielectric. The electrodes for this are adjusted in between the layers. These layers and the electrodes are arranged in contact with the terminals. The size and the number of layers determines the capacitivity of this capacitor. 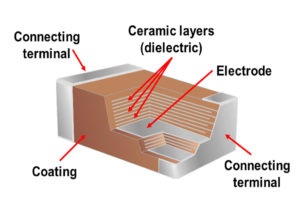 Ceramic Capacitor Symbol and the Polarity

Generally, like other types of capacitors called Tantalum Bead which do not possess any polarity, even these capacitors do not have any polarity. This makes it flexible in placing it in the circuit with any side.

The ceramic capacitor code remains the same for its various types.

This is based on the “EIA” coding System.

The same coding method of “EIA” is applied for the various values of the Ceramic Capacitors. For example, let us consider the capacitor printed on it with the value as 104. 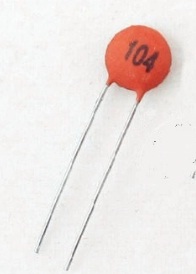 If there is no last number present in that case the initial two numbers represent the overall value of capacitance without any Multiplier in it. 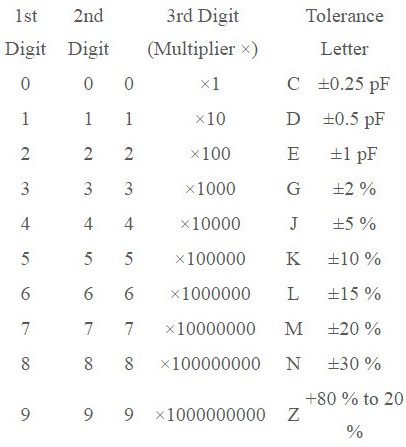 Capacitor Codes Based on EIA

Advantages and Disadvantages of Ceramic Capacitor

The various advantages of the ceramic capacitor are as follows:

The disadvantages of using these capacitors are as follows:

There exist various applications for these kinds of capacitors. Some of them are listed as follows:

Please refer to this link to know more about Mica Capacitor & Tantalum Capacitor.

There are various types in the Ceramic Capacitors. Above all the MLCC variant is the most prominent one.  As per the discussion above it clearly states the basic steps of involvement in its construction. It is very popular because of its non-polarized nature. Hence these capacitors can be connected with any side because of its nature. Have you come through any other capacitor which possesses non-polarized type?