You are here: Home / Digital Electronics / What is Thermistor : Working, Types & Applications

Temperature sensing is considered to be the most important part of any electronic application. In the household appliances or the industrial environment, the measurement of temperature to set certain limits for operation is needed. There are various sensors for this purpose some of them which are frequently preferred are Thermocouples, Semiconductor sensors, Resistance Temperature Detectors are popularly known as RTD’s and Thermistor.

While experimenting with the behavior of the semiconducting material called silver sulfide the first thermistor based on a negative temperature coefficient is found. It was made possible by the person Michael Faraday in 1833. He has documented his observation that as the resistance of silver sulfide component decreases the temperature tends to increase. Due to the occurring difficulties during manufacturing, the applications were limited. In the year 1930, Samuel Ruben has invented commercial thermistor.

A type of resistor whose resistance value is sensitive to the change in temperature is known as Thermistor.  This is the passive component in the circuit.  Material used in construction of this differs from RTD’s. The thermistors are made by using Ceramic or polymers.

The temperature measured from this thermistor produces accurate values.  These are of cheap and robust nature. But it doesn’t go well when we connect it in extreme cold and hot conditions. When the requirement is raised to maintain certain limited range thermistors are preferred. In the case of large temperature range  RTDs are used because they are made up of pure metals.

The symbol for the thermistors are

Thermistors functioning is described as

To understand the types in thermistor it is necessary to analyze the equation which shows the linear relation between the temperature and resistance.

dR= change in the resistance value

k=Temperature Coefficient of the first order

dT= change in the temperature

This equation is known as the approximation of the first-order differentiation type.  The temperature change analysis is based on the coefficient.

If the coefficient of temperature is positive. Then the increase in temperature increases the value of resistance. Hence this type of thermistor is referred to as Positive Temperature Coefficient type.

If the coefficient of temperature is negative. Then the increase in temperature results in a decrease in resistance. This type of thermistor is known as type Negative Temperature Coefficient.

This transition point of the device is known as the Curie temperature. Once this point is crossed gain the device behaves with a positive temperature coefficient.

As the value of the coefficient k is negative the temperature and the resistance become inversely proportional to each other. The increase in temperature results in a decrease in resistance and vice-versa. This type of thermistor is the most preferable one. Because these can be implemented virtually in any type of device where the temperature plays a major role. 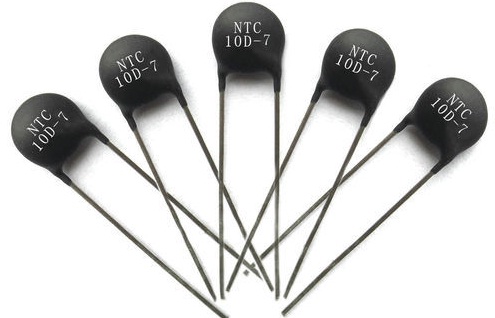 It is capable of providing accurate values of temperature as well as good enough in providing temperature control. These are used as the ‘Resistive Temperature Sensors’ and in the ‘current-Limiters’. in comparison to silistors and RTD’s the thermistors of NTC are highly sensitive to the changes in temperature.  The operating range of the NTC sensors is from -55 to 200 °C.

The materials used in the construction of these NTC thermistors are oxides of silicon, iron, nickel, and cobalt. Based on the process of production these are classified into three groups.

These types of thermistors are manufactured by taking the lead wires of platinum alloy and are directly interfaced in the ceramic body.

The above features are observed in Bead thermistors in comparison with the Disk and Chip thermistors. Because of its fragile nature, while using in the circuits these are sealed in the glass body. So, that the stability does not get affected and it also get protected from the mechanical damage. The size of it is 0.075 to 5 mm.

These are manufactured by using metal surface contacts. These are larger due to which the response becomes slower than bead type thermistors.

The power dissipation by this thermistor is proportional to the square vaue of the current. Hence the current handling capacity of these capacitors is better than that of bead thermistors. Disk thermistors manufactured by the blend of oxide in the round of die. The tape-casting process is used in chip thermistors fabrication. the size of it is 0.25 to 25 mm.

To use the thermistors above the range of 150 °C thermistors are designed by encapsulating them in the airtight glass. These are more stable and are protected from environmental changes. The size of these thermistors ranging from 0.4 to 10 mm.

The characteristics of the thermistors changes based on whether it is of positive coefficient type or negative coefficient type. In the PTC temperature and resistance are in direct proportion whereas in NTC these are inversely related to each other. 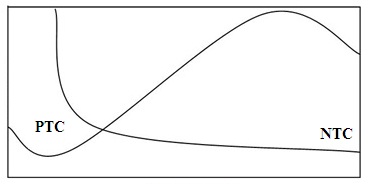 The applications of thermistors are as follows:

The sole purpose of it is to maintain the amount of resistance in the circuit. Such that the effects of temperature can be compensated.

The sensors dependent on temperature are known as thermistors. These are the sensitive devices that react to the small changes in temperature. The requirement to maintain the specific temperature these devices are used. To measure, to control and to cool a Peltier device these thermistors are used. To use it along with a device it is surface-mounted on it and the temperature is monitored. After the discussion can you describe what is the purpose of Stein-Hart equation in the thermistors?

1. What Can a Thermistor Use?

The thermistor is a word derived from the combination of thermal and resistor. This clearly states the sole purpose of thermistors is to deal with the heat based on resistance. Further, these are well-preferred as temperature sensing devices.

When the heat in the circuit increases the circuit gets heated up. During such a situation to protect the circuits thermistors are used.

2. What causes a Thermistor to Fail?

The occurrence of open-circuit conditions because of the mechanical separation between lead and resistor. This results in improper handling or damage incurred due to heat. This is one of the reasons for the thermistor to fail.

Another reason can be the aging of the thermistor. Due to all the above reasons, the fluctuations occur in the temperature values and it displays the incorrect set of values for temperature. This can be overcome by the replacement of a thermistor.

3. How do you test a Thermistor Sensor?

To test a thermistor sensor we can use an analog multimeter.  The steps followed on testing the thermistors are:

4. Does a Thermistor have Continuity?

Thermistors are the devices that are designed to show the value of resistance based on temperature. The fluctuation in resistances will affect its temperature. Hence these devices don’t possess continuity.