Super Capacitor can be considered as the king of all capacitors where in future it might even replace the batteries.  These are known for their ‘Double-layer’ properties. These are also referred to as the ‘Electric Double Layer Capacitor (EDLC)’.   Like a normal capacitor they also consist of  two electrodes separated by a dielectric. But here the distance between electrode is very small and the dielectric is only a thin layer of insulating material .  The electrode with the insulating material is then dipped into a electrolyte which is organic or acqueous type.

Super capacitors consist of the highest specific power. This capacitor possesses the fastest charging and discharging times. It possesses very low resistance internally. It means in the lesser duration of the time the capacitor can be charged. Hence these are referred to as Ultra capacitors. The Maximum  Charging Voltage of these capacitors lies in about the range of ‘2.5 and 2.7 Volts’. These capacitors are faster in responses as well as Charging and in terms of Discharging.

What is a Super Capacitor?

The combination of the properties of basic Capacitors, as well as the Batteries, can be defined as the Super Capacitors. These are designed in such a way that it holds the large value of capacitance. These enhanced properties make these capacitor’s performance and utilization different from other capacitors. 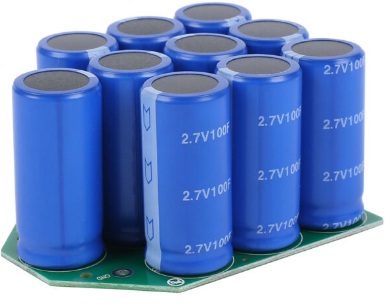 Like the other basic Capacitors, even these are classified as Passive devices. The purpose of this is to store and then draw the energy based on the requirement. This is possible by creating or forming the Potential Difference across the ‘two electrodes’. These electrodes are further separated by the medium of Dielectric. The created Potential Difference makes the charge to store in the component.

Once the Capacitor is connected to any other component by removing the potential Difference the charge tends to flow. If the density of the energy is high then such capacitors can be defined as Super Capacitors. The working is similar but the difference is present in the construction. Normally, the other ‘Electrolytic Capacitors’ consists of a single layer of the Dielectric. In this type of capacitor there exist two layers.

It can be used widely in various applications because these capacitors are considered between the general capacitors and the batteries. These are very popular because of its fast nature. One of the basic applications of it is to store the energy in the ‘Kinetic Energy Recovery Systems’ of the Automation industry.

In the flashes used in the photography, Static RAMs, mp3 players where the lower values of the Output voltages that must be constant are required. These types of capacitors are preferred. In the future, all the other devices like Electric Cars, Cell Phones, and the Laptops which used to run on the various batteries can be replaced by these capacitors. The above discussed are some of the major applications of  Super Capacitors.

How to Charge a Super Capacitor?

As it is compared to the battery these possess low density in terms of charge. Even worsen where the characteristics are considered of discharging these capacitors. Super Capacitors can be charged and discharged unliminited number of  times. By Proper maintenance  it can be made to use and last for many years.

In comparison with the battery, these Super capacitors possesses a very low value of ‘Equivalent Series Resistance’. These capacitors have higher amounts of in and the outsourcing of the currents. The fastness of this capacitor makes it prevent the condition of the ‘Thermal Runaway’.

To charge this capacitor there are two rules to be considered.

This is how  a Super Capacitor gets charged. 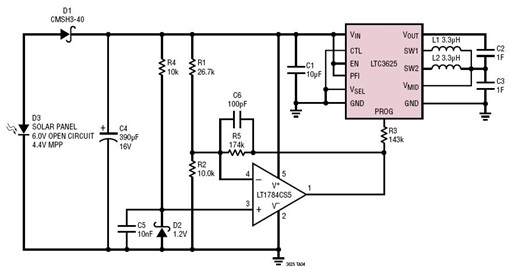 Let us consider the battery made up of lithium. The comparison between this capacitor and the battery is as follows.

Inverter designed with the help of the super capacitor can be designed based on solar energy. This energy obtained from the rays of the sun converted into ‘Electrical Energy’. This conversion is based on the ‘Photo Voltaic Cells’ present. As it is based on the solar charging the charge stored in the day can be utilized during night hours.

Based on the amount of energy stored in the solar cell the battery gets charged up. A super capacitor is connected to this circuitry in such a way that it enhances the battery life.  These circuits can be provided with the provision of ON and OFF switch. Hence the devices connected to it can be operated based on the requirement.

The working of the Super Capacitors resembles similar to that of various general capacitors. The various introductory specifications in this make it more compatible than batteries. Other than Inverters can you tell practically where u can make use of these Super Capacitors?