You are here: Home / Electronics / Know about Klystron Amplifier Types with Applications 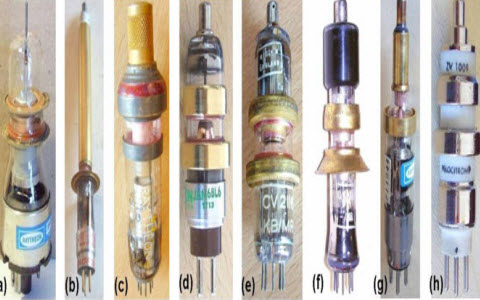 A klystron amplifier is a specific linear-beam vacuum tube, which is used as an amplifier for high resonant frequencies. The term ‘klys’ comes from the stem form of a Greek verb mentioning to the wave action breaking against a shore. And the suffix ‘tron’ is the place where the action occurs. The name of this amplifier was recommended by a professor “Hermann Fränkel” in the department of classics from the Stanford University when the amplifier was under progress.

The o/p signal can be joined back into the i/p cavity to make an electronic oscillator to produce radio waves. The gain of this amplifier can be 60 dB (one million) or above, with o/p power up to tens of mw. But the bandwidth of this amplifier is narrow, usually it can be up to 10% in some equipments.

A klystron amplifier uses different cavities which control the electric field around the axis of the tube. A grid is placed in the middle of these cavities to allow the electrons to flow. The first cavity together with the coupling device is termed as a ‘Buncher’. In the same way, the second cavity with coupling device is called as a ‘Catcher’.The field direction changes with the frequency of the Buncher cavity. These changes, substitute hurry and slow the electrons of the beam flowing through the grids. The space outside the Buncher grids is called the drift space. The Bunches can be formed by the electrons in this area when the faster electrons overtake the slowed electrons. 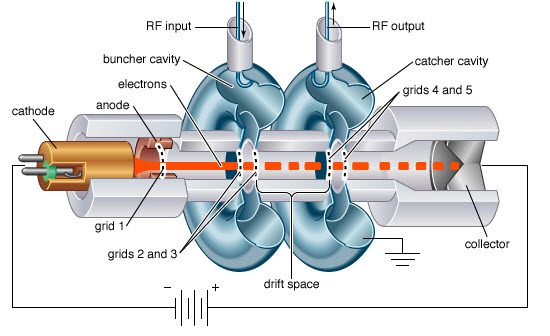 Here, the catcher cavity is used to absorb energy from the electron beam.. The catcher grids are located with a bean, at a place where the Bunches are totally formed. The place is determined by the transit time of the bunches at the natural RF of the cavities. The collector receives the energy of the electron beam and alter it into heat as well as X-radiation. The addition of an intermediate cavity b/n the i/p and o/p cavities of the basic klystron can be improves the power o/p, efficiency and klystron amplification. Extra cavities serve to velocity modulate the electron beam and generate an increase in the energy available at the o/p. 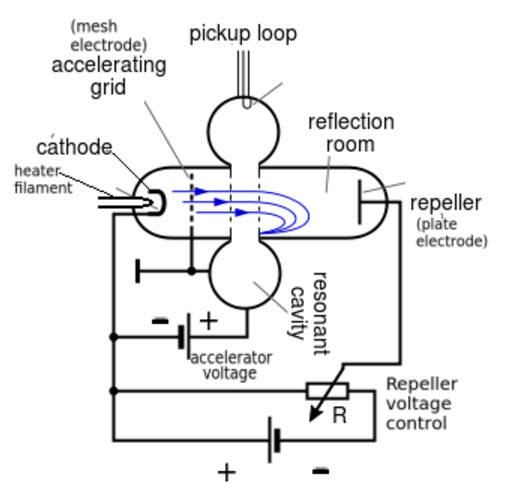 The reflector voltage may be changed somewhat from the optimum value, which effects in some loss of o/p power, but also in a difference in frequency. This result gives an advantage for controlling of an automatic frequency in receivers, and in FM (frequency modulation) for transmitters.The modulation level which applies to transmission is small enough that the o/p power basically remains constant. At sections far from the optimum voltage, no oscillations are found at all.

The applications of klystron amplifiers are

Thus, this is all about the klystron amplifier, types of klystron amplifiers and applications. We hope that you have got a better understanding about this concept. Furthermore, any queries regarding this concept, please give your valuable suggestions by commenting in the comment section below.Here is a question for you, what is the function of Klystron Amplifier?